This new center-cockpit model comes chock full of creature comforts. Jet tub, anyone? A boat review from our June 2009 issue 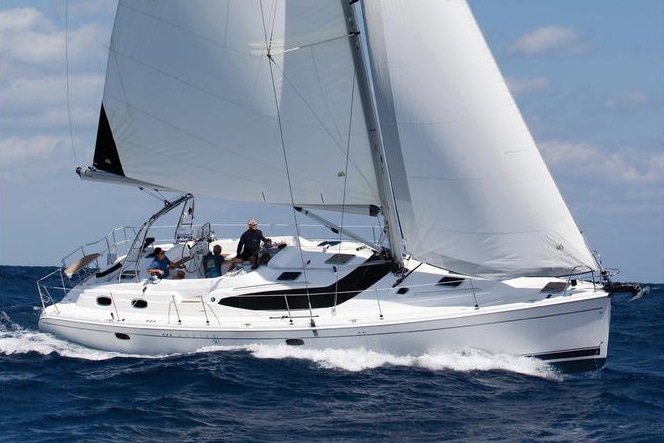 “Hmm,” I thought as I stared at the stern of the new Hunter 50 CC that was parked at the dock during the Strictly Sail Miami boat show. “Which winding staircase should I take when I step aboard the swim platform and climb the four steps to the deck?”

Since Hunter’s Ted Norris chose the stairs to port, I went to starboard, past the centerline life-raft rack built into the stern pulpit. I met him on the aft deck, right next to the rear-facing, padded bench seat with its cushioned, stainless-steel backrest and removable cocktail table.

“This looks comfy,” I said to myself, a refrain I repeated often as I toured the company’s latest big-boat offering. And the 50 CC is big. Built on the hull developed for the Hunter 49, the 50’s center cockpit and deck are raised enough to provide 6-foot-8-inch headroom below.

Standing at the helm, you sense that you’re a good distance from the water, something I was to appreciate a couple of days later when we bashed our way through some impressive slop in the open Atlantic off Miami’s South Beach. Though the boat we sailed had neither bimini nor dodger, not a drop of water reached the cockpit, although plenty poured over the bow as we heeled and sailed closehauled in wind gusting toward 20 knots.

Wide side decks mean it’s easy to move about topside, and 29-inch-high lifelines make you feel secure when doing so, as do substantial stainless-steel handrails along the cabin top amidships and forward of the mast. Moving from the cockpit seat and over the wide coamings to the deck is made easier by a 1-foot-high step located outboard on the coaming. I did, however, wish that there’d been a bimini frame or some other handhold with which to steady myself, especially when I tried to shift position when the boat was under way.

Another appreciated on-deck feature was the plentiful storage available for water toys and gear, both in twin lockers aft and in a roomy locker just behind the twin bow rollers and chain locker. In addition, there’s a pair of beefy midship cleats to both port and starboard for spring lines.

But it’s below that the volume of the 50 CC becomes really apparent. This boat is clearly designed for people who are planning to spend some time aboard, living in a marina, perhaps, or cruising up and down the Intracoastal Waterway. The galley is well thought out, with tons of storage.

Appliances include a three-burner propane stove and oven, a front-opening fridge/freezer combo, and a second freezer accessed through the Karadon countertop. Solid stainless-steel fiddles will keep food and dishes where they belong while doubling as useful handholds.

To port, a generously sized nav station and captain’s chair can be used as an office away from the office, and there’s plenty of room for a full complement of electronics. The forward portion of the saloon features an ample table to starboard, one that drops down to make a double berth. Moreover, there’s a good sea berth/settee to port.
Cherry-veneer panels and hardwood trim throughout combine with natural light to create a rich-looking interior. LED cabin lights, a built-in Bose Surround Sound stereo, and a flat-panel television (mounted on the forward bulkhead) all point to comfort for all creatures great and small.

The forward cabin is available in a couple of configurations, one with an island queen berth, the other with a centerline partition and two smaller doubles. In either layout, there’s a separate head and shower between the berths and the saloon.

Aboard the 50 CC, however, the real luxury is found aft, where a chaise lounge on the port quarter and a settee to starboard frame an island queen that incorporates a three-panel base that can be folded back to unveil a full-size tub with jets. This was a standard feature on the first few hulls, but it was made an option on later ones at the request of buyers who said they’d take additional storage over bubbles. Not that storage in the after cabin is really an issue, thanks to the walk-in cedar-lined closet to starboard.

As is the case with most Hunters, access to the engine and the dripless shaft gland is excellent, and the deep bilge, with its dual pumps and well-labeled through-hulls, will be appreciated by safety-conscious owners. Here, below the waterline, hull construction is solid glass, and there are layers of Kevlar from the keel forward for collision protection.

Topside, as on the aft-cockpit Hunter 49, the 50 CC carries the trademark Hunter stainless-steel arch and traveler above the wheel. A double-ended mainsheet leads to an electric winch nearby and to another on the cabin top. And the 50 is powered with the same B&R (Bergstrom & Ridder) rig whose swept-back spreaders eliminate the need for a backstay.

The boat we sailed came with Hunter’s Mariner Package, as have most of the 50 CCs sold to date. It includes a Seldén in-mast furling mainsail with vertical battens as well as a self-tending nonoverlapping jib set on a Furlex furler. There several different sail combinations for the 50, including a tall rig and various headsail configurations.
If this were my boat, I’d opt for an additional overlapping genoa and an off-wind sail. Running back toward the marina, with the breeze well aft, we could’ve used more horsepower.

Sailing upwind in a brisk breeze, we saw boat speeds in the high 6- and low 7-knot range. On a beam reach, we did a little better than 8 knots over the ground, according to my handheld GPS. In the rough seas we encountered, the rack-and-pinion steering felt a little sluggish, but that may have been because it hadn’t yet been adjusted.

Under power, we were pushed along comfortably at about 8 knots by the 110-horsepower Yanmar. I did find that I had to keep a steady hand on the helm or we’d get pulled off course by prop wash over the rudder. When we backed down, windage and prop walk to port proved challenging, making the 50 CC’s bow thruster more of a must than an option.

All in all, the new Hunter serves up lots of creature comforts-at a base price of just under $400,000. (With all its options, the boat we sailed came in at about $540,000.) That figure shouldn’t starve the cruising kitty of an owner looking for a nice ride in this size range.