Advertisement
How To Reader Tip: No More Leaky Mast

Are there puddles at the base of your mast after a rain storm? Try this simple fix.

On nights like this, a leaky mast is the last thing on your mind—but just wait until the next front rolls through… Green Brett

Winterlude had an ongoing persistent leak where the mast went through the deck. It wasn’t a big leak, just a nagging pain. The prior owner’s solution was to keep layering stuff on stuff. Peeling away layer after layer, we discovered every mast boot tape known to the marine industry, mixed with good ole duct tape and even waterproof first aid tape! When one thing didn’t work, he just layered it over with the next solution of the day!

One winter, we decided we were going to end the mast leak once and for all. Anchored in French Cay Harbor in Roatan, we were on deck determinedly removing sticky layers one after another with what seemed like miles of cut away stuff that once wrapped our mast boot. A cruising acquaintance came flying by in his dinghy asking, “What are you doing?!” as if it wasn’t fairly obvious. We weren’t exactly overly gracious in chit‘chatting with him until he happens to say the magic words: “Want to know how to solve that leak once and for all, guaranteed?”

OK, we’re suckers, what was the magic solution? (and how much was THIS going to cost???)

Seal it with a wax ring commonly used to seal a home toilet to the floor. We both looked at each other and at the expensive mast boot material we had already purchased on the recommendation of other cruisers and shook our heads—it can’t be! Our cruising acquaintance hanging onto our caprail acted as if he had imparted the wisdom of the ages and then zoomed happily on his way. OK, what to do. Rain is forecast in a few days, and we had a sticky mountain of previously used crap laying all over our deck. 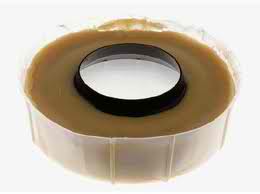 Do we put the new stuff in place, or do we see if we can find a toilet wax ring in French Harbor, Roatan. French Harbor isn’t large, but it does have homes and some of them even have indoor plumbing, so we went to town to wander through the dusty shelves lining the hardware stores. Sure enough, the first hardware store with plumbing supplies had a wax ring for a few dollars. We bought it.

Back aboard, of course, in the tropical heat, removing it from the packaging was a sticky gooey mess—thank goodness it resided in its own plastic tray designed to contain the goo. Looking at the ring and the mast step, now cleaned out and exposed, David decided the only way to tackle this mess was to be messier! So he started forcing the toilet wax ring around the mast—in chunks, obviously since it didn’t fit exactly. Ooey gooey described this step perfectly. We were just hoping we’d never have to REMOVE this mess! One advantage of the wax being so gooey was that it formed exactly to the shape around the mast and the metal ring surrounding it.

Once the gooey part was done, we needed a major cleanup—more on David than the boat. But finally he was goo free. We decided to use the nice white mast boot stuff we had previously brought back with us to the boat from the US to cover the toilet wax goo. We carefully read the instructions and applied the white mast boot over the wax. It looked good, but we’d have to wait a few days to see if it was leak free.

Two days later a norther/trough parked itself on French Cay Harbor. Who knows how much rain we got, but we had to bail the dinghy a couple of times—usually a sign of a torrential downpour! When we removed the teak paneling down below to view the mast as it goes down to the keel, we found DRY! No drips, no weeping, no puddles, nothing! So far so good!

Five years later, we have never touched the mast boot and it’s never leaked. David’s theory, stolen from Eileen Quinn‘s song, is “if it ain’t broke, don’t use it” has been working well.

_Do you have a simple solution for a problem on board? Send your idea and a photo to [email protected]. If we use your tip in the newsletter, we’ll send you a cool **_Cruising World_ Hands-On Sailor t-shirt!**_

A Family Cruises Through Christmas in the Caribbean Islands