The girls on the bow of the panga as we sped out to pick up Arnie. We’re going about 25 knots. Michael Robertson

“Dad, there’s a guy in a panga outside.”

I scrambled up the companionway and into the cockpit to greet the stranger, “Hola! Buenos dias.”

I can’t recount the conversation here, but in the still, sunny morning, anchored several hundred yards offshore, we exchanged pleasantries and then got down to business. The long and short of it is that I understood his Spanish, he understood my broken Spanish, he waited while I darted back down to grab a couple tool bags, and then I jumped into his panga. He leaned forward for a hearty handshake and introductions before winding up the 40-horse Yamaha and driving us ashore.

Puerto Magdalena is a small fishing cooperative tucked into lovely, lovely Man O-War cove in Bahia Magdalena. It’s a little place that doesn’t get a lot of visitors, but that is plenty busy with the demands of fishing, housekeeping, and tending to the 30-or-so kids who call this place home. We’d been here over a week and no longer felt like strangers beaching our dinghy.

I wrote in an earlier post about how this community cleared out for the Christmas holiday, leaving us anchored off a ghost town. They’d raced across the bay in chock-full pangas, a thirty-minute run to the bigger city of San Carlos where relatives lived. Well, days had passed, they’d returned, and life had resumed. But there was a hustle and murmur between our new friends, a buzz throughout the community. New Years’ Eve was next and tradition held that all the same relatives they’d visited for Christmas, would now descend on Puerto Magdalena, en masse.

This is a big deal. Pangas full of giant amps, hundreds of white plastic chairs, and countless cases of Tecate had already begun landing and off-loading. Decorations were being carefully hung and arranged. Incrementally, the largest expanse of concrete in the pueblecito was groomed and transformed to serve as a dance floor.

But there was a problem, a problem I first learned about from the panga driver.

He told me he was the mayor, and the sheriff. It was his job to ride out and query the English-speaking men on the cruising boats: Did any of us know how to repair diesel engines? Standing in the cockpit and eager to be of help, my mind raced to my Nigel Calder books and the hours I’ve spent working on my first boat’s 11-H.P. Universal diesel auxiliary and Del Viento’s 55-H.P. turbocharged Yanmar. I wanted to tell him, “Yes, indeed I am a diesel mechanic.” But I’m not and I blurted out an enthusiastic, “Mas or menos!”—which means either “more or less, yes” or, “sort of, kind of.”

The town’s generator runs six hours a day and is the only source of electricity for the Puerto Magdalena residents. I stood before the engine, bolted to a concrete pad in a small tin-roofed shack on the side of a dirt hill. It was silent; it had stopped running the night before. The party was in 48 hours and power was absolutely necessary, everyone was anxious. At least ten men stood around, hopeful as I and two other cruisers stared at the hulking machine, our minds blank. It was at least thirty times the size of my Yanmar and didn’t look anything like it.

We checked the fuel filters and then, with the fuel pump on, the three of us turned a few bolts to try and bleed the beast. Tiny spurts of air erupted here and there, but all of us knew we were in over our heads and that we wouldn’t be saviors today. I was the only one who dared speak any Spanish, and so became the interpreter for our little incompetent crew. I made things worse by smiling and uttering hopeful reassurances every time we’d come up with something new to try.

Finally, our desperation and ineptitude were evident and we were pushed aside while the locals resumed their work with a crescent wrench, crudely lifting out injectors while they turned the motor over to see puffs of atomized diesel. We all watched amazed, you can do that?

But no progress was being made. Finally, one of us hailed Arnie, a guy we’d met days before and who was off on the small red boat anchored miles away. He’d told us he was a diesel mechanic. With credibility I could muster only from a desperate, out-of-options group, I announced in Spanish that we had a plan, a real-life mechanic was among us and we needed only a speedy ride to go retrieve him. Back in the panga I went.

It turned out Arnie was the real deal, a heavy-up diesel mechanic who’s seen it all. Standing beside the engine, I walked him through everything we three had done and translated his requests to turn on the fuel pump, turn over the engine, find a section of hose like so.

And in 15 minutes he’d found it, a tiny filter hidden up in the body of a water trap, clogged like you can’t imagine. The generator ran like a top. Joy and relief erupted. Arnie was the hero, but the men standing around directed their praise at me, the face of the cruisers, the communicator. While Arnie put away his tools, my back was slapped and I was urged to bring my whole family to the big party, assured I wouldn’t pay for a beer all night. 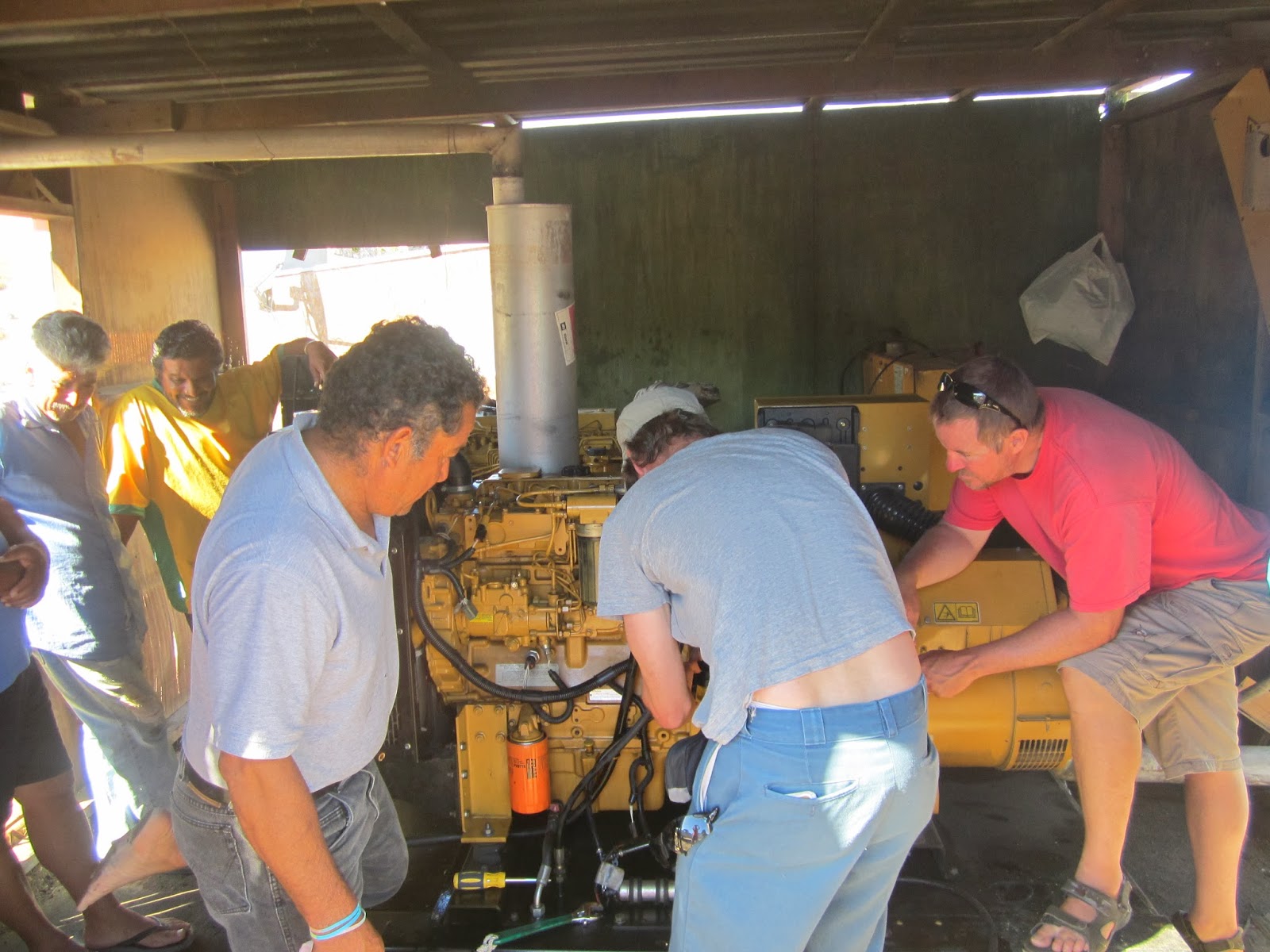 So that’s Arnie in the middle, hard at work. That’s me in the red shirt, watching. 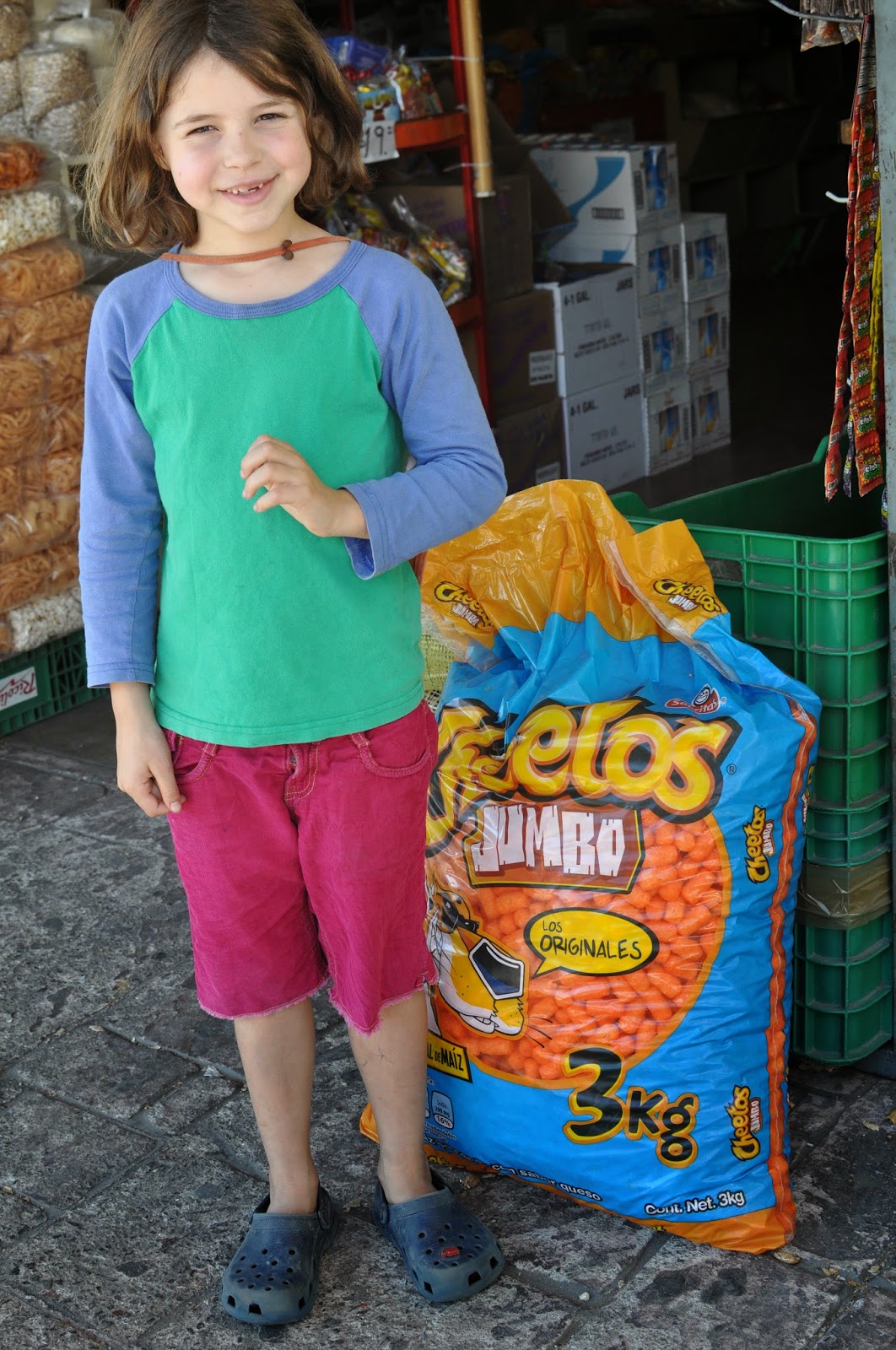 Finding a bag of Cheetos in Mexico is about as hard as finding a tree in a forest. But this bag, almost seven pounds, was a first.