It was a problem. It was a problem that drove Windy to a place beyond extreme agitation, but still this side of madness. It bothered me too, but I was resigned to living with the problem simply because the remedy seemed so daunting. Then Windy took a turn decidedly towards madness: “It’s either we fix this or we sell the boat.”

Our mast is over 60 feet long. It’s hollow and made of aluminum. In the summer of 2012, we installed a new anchor light and a wind instrument transducer at the top of the mast and a new radome about halfway up the mast. When we installed these devices, we dropped cables down the inside of the mast and out the bottom. Since that time, every slight pitch and roll of our boat has caused yards and yards of loose cables to swing, hitting the inside walls of the mast. In the cabin down below, this produced a cacophony that I imagine is like being trapped in the bell tower of Dublin’s Christ Church Cathedral at noon.

The obvious fix for this problem is to remove the mast from the boat. But that is a big deal, and certainly seems like an extreme measure simply to silence a few clanging wires. I Googled nine ways to Sunday for a way to fix this acoustic nightmare without removing our mast. Windy and I spent way too many hours manipulating improvised tools through small holes in the mast, trying to catch and secure the troublesome wires.

It’s either we fix this or sell the boat.

As we planned to haul Del Viento sometime this summer, we included in that plan a decision to pull the mast, somehow secure the wires, and re-step the spar.

So the first thing you should know is that I’ve never pulled the mast on a boat before. I came into this project knowing little except the obvious: I would have to detach the following things.

Beyond that, I trusted that the yard would take care of the rest.

“I want to pull the mast,” I said in Spanish to the yard manager, “maybe tomorrow?”

“Si, I’ll contact the company we work with and let you know what time the crane will be here.”

The next day, a couple hours later than scheduled, the crane arrived. I greeted the operator and asked whether he’d done this before.

“Oh yeah, lots of times—all these boats,” he said waving his arm across the sea of boats sitting with ours in the sun-scorched yard. I enthusiastically told him I was relieved to hear this, as I’d never done this before. Then he hemmed and hawed (in Spanish) and told me I’d first have to remove the radar. We both looked up the mast.

“No way Jose!” (I didn’t really say that, but I did ask him why, protesting mildly because the few Youtube videos I’d watched the night before didn’t show anyone removing their radar so they could run a sling up the mast.) 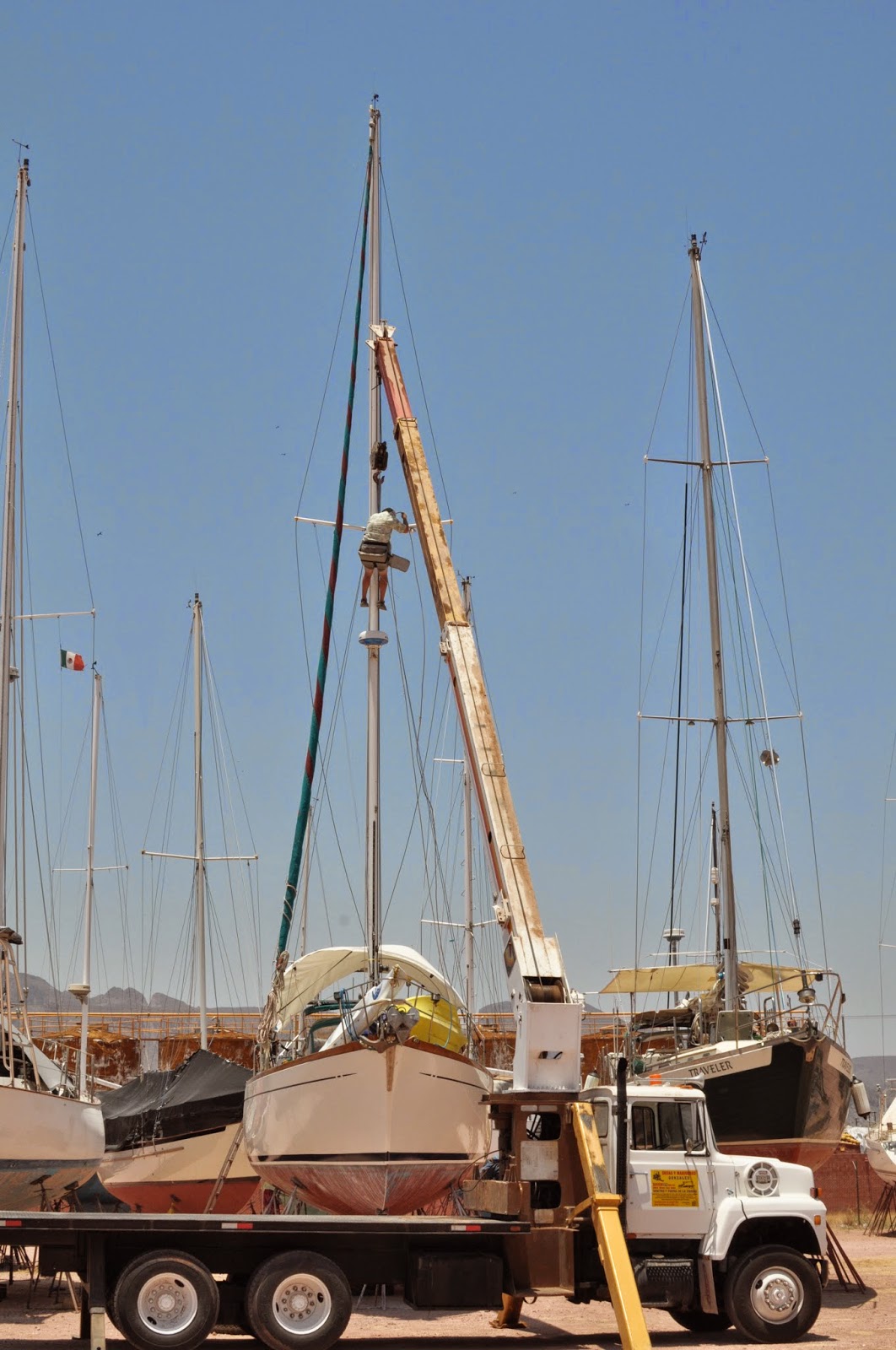 From his explanation (in Spanish), I understood that he planned to wrap his short loop around our mast, attach it to his hook, and pull, letting it slide upward until it caught beneath the tangs where my lower shrouds attached. I’d learned from Youtube and Google that this was not the way to go about this. I’d learned that pulling from these tangs or even from the spreader bases was a recipe for damage. I’d learned that a good way to pull a big mast like ours was to loop beneath the spreader bases, but to attach separate lines to this loop and run them down to the halyard winches, transferring the weight of the mast to the winches, but retaining a control point up high, above the center of gravity.

I realized I was now in charge of this operation. I explained to the crane operator and the assembled yard crew exactly how I wanted to do this. Everyone agreed.

Then the crane operator offered that he wasn’t sure he could lift the base of the mast above the lifelines. The arm of the crane was now extended to just about a foot above the spreaders.

“How much higher can you go?”

It turned out the crane operator who’d assured me of his experience had no idea our mast was keel stepped and was amazed at the notion. Laughing and shaking his head, he drove off. The company he worked for had a larger crane, but it was broken. He thought it would be fixed within two weeks.

“There is another company,” the yard manager assured me, “I’ll call them.”

It was clear when the next crane arrived that this is what we needed from the start. It was clear when I talked to the driver that I was still going to have to manage this effort. I again explained what I wanted to do. I asked him to haul me up in my bosun’s chair, explaining that I’d secure the loop beneath the spreaders exactly as I wanted them, but leave it hanging in a way that it would be easy to grab later with the hook.

So that’s what I did. I positioned the loop and dropped two attached lines to the deck. Once he lowered me, I detached my chair, he hooked the loop above, and I tensioned the lines on the halyard winches. Then the crane pulled and our mast lifted without complaint, the top of it soon reaching more than eight stories up. We guided it down to the old tires, crates, and chairs I’d scrounged and assembled on the ground alongside our boat.

Just like that we turned Del Viento into a powerboat…a disabled powerboat, more on that in the next post.