Celebrated six months at sea with nice meal last night--- tasty, tender lamb shank (lower half of leg of lamb) with oodles of gravy and potatoes and peas - a Sunday dinner one day delyed!

Celebrated six months at sea with nice meal last night— tasty, tender lamb shank (lower half of leg of lamb) with oodles of gravy and potatoes and peas – a Sunday dinner one day delyed! Dessert was pineapple and mandarin with thick cream, followed by coffee with dark chocolate and some Tim Tams (Australian choc biscuits) & a few sips of a nice cognac. Lovely night with clear sky and increasingly calm seas – swell a lot less than it had been, at around 2m – conditions which continued into the day.

Later: …..Oh well! So much for my plan to get as far E now as possible – doesn’t look likely to happen…. After looking at latest long-term gribs, soon changed course. Fiji seems to be brewing up some nasty weather quite soon – and sending it onto my intended path W of Tonga over several days – we’d end up right in the middle of it, if we kept going NE, or so the grib files indicate. Things might well change, but in the meantime, we’re as close-hauled as possible, making as near to N as we can, aiming to avoid the nasty weather – possibly by passing W of Fiji – someting I was trying not to have to do… If we continue like this, will just have to make Easting furher N, maybe after the NE Trades.

In order to be so close-hauled, needed to tension genoa sheet more – but sheet bend, joining two sections of genoa sheet, was in the way – so took another length of rope and connected to sheet with a rolling hitch – and then took tension on that rope to tension genoa sufficiently – as always, the rolling hitch, when correctly tied, worked wonderfully to take the load off the problem rope! 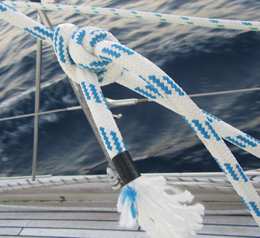 In these calm conditions, was able to walk around easily on deck and check things over. Found we were only putting in half the amps we should be from solar panels … One of the pair of wires taking power to down below had been badly chafed by the edge of the hole it passed through in the pole – it was completely cut and corroded – another job waiting to be done as soon as possible – tomorrow, hopefully.

Swallow came by near sunset – looked as though thinking of stopping but could find no still resting place, so eventually flew on…. Pity! Also a white-chinned petrel and petrel with white, black-tipped underwing and dark upper body – haven’t checked on it yet.

Still well behind on replying to emails – seem to have had a lot of problems, checking of weather and sail-handling to attend to, as well as catching up on sleep, so not enough time in the day to reply to many – apologies to those kept waiting….

A Family Cruises Through Christmas in the Caribbean Islands