Designed and built for easy handling and comfortable coastal cruising, the new Alerion 41 also satisfies your need for speed. 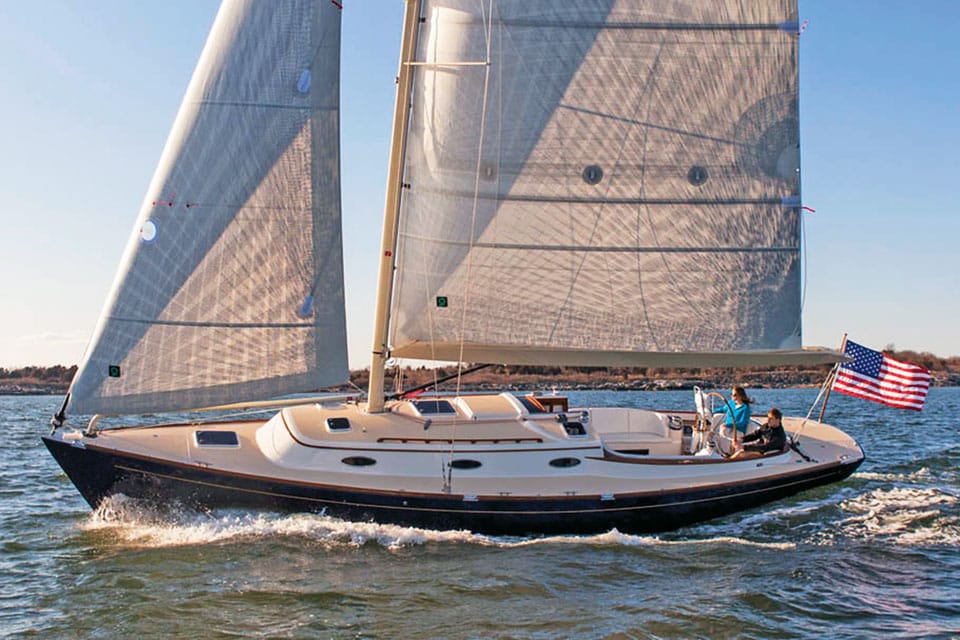 With sails set on a breezy day, the Alerion 41 has the stylish good looks enjoyed by its siblings in the daysailer lineup. Courtesy of Alerion Yachts

There was no mistaking the new Alerion 41, waiting patiently in its slip for Scott Bryant of Alerion Yachts to get us under way. As her designers intended, she exhibits most of the characteristics that made her smaller siblings in the Alerion Express line so popular.

The A41 descends directly from the original 28, designed in the 1980s by the late Carl Schumacher for Ralph Schacter of Southport, Connecticut. An enthusiastic owner of an Express 27, also by Schumacher, Schacter wanted to combine the classic good looks of Nat Herreshoff’s legendary Alerion with a modern underbody and rig. The Express 28 would be a daysailer, with minimal accommodations below and a cockpit layout suited to easy solo sailing. | |On the 41, the cockpit’s the place to be. All sail control lines lead back to winches just forward of the helm. Guests can stretch out forward, while the skipper has room of his or her own in which to work.|

Although the Alerion 41 shares many of the AE 28’s design themes, the look has evolved over time. Still, from a distance, her proportions seem just right. Keeping her freeboard relatively low takes full advantage of the lovely sheer line, which is the key to creating a “buy me” first impression, and gaining headroom via the superstructure gives the thoughtfully designed interior a chance to seal the deal. Elliptical portlights, and teak eyebrows and handrails reduce the perception of height.

Alerion Yachts’ design team conceived the 41 as a comfortable coastal cruiser for “multiple couples,” to quote the brochure. The master stateroom forward features a comfortable V-berth. A hanging locker on the starboard side is deep enough to swallow a modest selection of skirts, shirts and trousers for dressier activities ashore, and the bureau right forward seems adequately spacious for stowing socks, underwear, T-shirts and other small items. The head opposite the bureau is a little tight but not uncomfortably so — just one of the compromises necessary in fitting accommodations within the confines of the hull’s design. Natural light and ventilation come from a hatch let into the foredeck just forward of the trunk cabin. On gloomy days, you’ll want to turn on the electric lights. | |A well-appointed interior includes private cabins for two couples and a very livable saloon, with standing headroom throughout.|

The saloon fills the middle of the boat, and in a pinch can accommodate two guests for overnight stays. A drop-leaf teak table splits the area and serves both settees during meals. Finished in the Herreshoff style of white overhead and panels trimmed in varnished teak, the saloon is cozy and very inviting. My favorite feature is the convertible nav station at the after end of the starboard settee: Remove the narrow cushions, raise the desk to its proper height and lock it into place. This arrangement assumes that the owners will navigate most of the time via electronics, though the desk will accommodate a book of paper charts. Two stowage cabinets, accessed via louvered doors, on each side of the saloon hold sundries.

Coastal cruisers have the option of tying up at a marina every night and eating ashore, but the A41’s galley won’t force the issue. It’s a seamanlike U-shaped affair with a deep double stainless sink, LPG stove with oven, microwave, drawer-style DC refrigeration and an icebox. Owners will find adequate stowage in an assortment of cabinets for tableware and dry goods.

You’ll find the second private stateroom aft on the starboard side — really an expanded quarter berth, with room for two adults. I thought this area was a bit tight, but it would be great for off-watch crew to sleep in during overnight passages. I liked the wet/dry hanging locker here. | |A handy fold-down swim platform and ladder is incorporated into the transom in a way that does not detract from the boat’s graceful lines once it’s been raised.|

Fully one-third of the A41’s length overall is cockpit. Settees in the forward section encourage guests, especially the nonsailors, to relax and watch the world go by. My favorite feature topside is the articulated platform in the transom. Deployed, it is a swim platform, but more important, it eases boarding from a dinghy.

Out on Narragansett Bay, this little beauty’s easily driven hull and lightship displacement of 16,000 pounds barely put a strain on the 40-horsepower Yanmar with saildrive, so the engine remained unobtrusive throughout its rpm range. Nevertheless, we were happy to raise sail and listen instead to the wind hissing over the rigging.

The halyards lead via rope clutches to winches on the after end of the coachroof. Molded-in sheet wells keep the cockpit tidy. This example of the A41 had the optional Hall Spars VBoom, which neatly captures the fully battened mainsail via lazy jacks and the boom’s deep-V shape. It’s simple and lightweight.

Sailing the A41 also is simple. All of the sail controls lead under the deck to the Harken reversible electric winches mounted just forward of the wide-diameter wheel. In a moderate breeze, the A41’s high-roach main and nonoverlapping jib, set on a Hoyt Jib Boom, hustled us close hauled at 8 to 9 knots and about 30 degrees to the apparent wind. The helm remained light and well balanced, and once we were in the groove, she would nearly steer herself. Tacking merely required turning the wheel.

After about 30 minutes at the helm, I began to learn the A41’s language well enough to mostly ignore the telltales and instruments. What a lovely boat to sail.

The Alerion 41 was given special recognition in the 2014 Boat of the Year awards. Click here to read more. View more photos of the Alerion 41.

Dennis Caprio is a freelance marine writer based in Newport, Rhode Island. This article first appeared in the November 2013 issue of Cruising World.