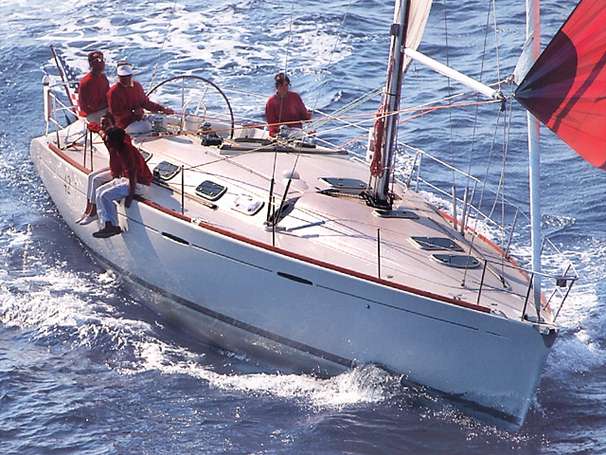 The Beneteau First 42s7is a very good sailing boat. In addition to the straight
cruising version that we tested, she is offered in a racing version with a
larger mainsail, a more flexible mast for mainsail shape control, and additional
racing gear. I understand that she has been successful on the IMS cruiser/racer
circuit. She is well built, has nice cruising accommodations for two couples and
is easy to handle. She also represents good value at under $200,000.

The 42s7 features an aft cockpit layout, which many cruisers and pretty much all
racers prefer over the midship cockpit configuration. The cockpit is compact but
very comfortable, with good foot bracing for the crew when the boat heels.
Lewmar 52 self-tailing primary sheet winches are located well forward on the
cockpit coamings, which renders them operable by the crew though not
conveniently from the helm. The mainsheet and traveler, plus all halyards and
reefing lines, run through stoppers to Lewmar 44 self-tailers on the aft end of
the cabin. Sitting at the helm is comfortable from windward or leeward, either
when level or heeled. The cockpit lockers are very large, offering more than
ample storage for sails, rubber boats and other bulky or dirty gear. Beneteau’s
excellent no-snag cockpit locker latches lock automatically upon closing,
enhancing convenience and safety under way. They are designed not to catch lines
and may be operated from the inside by pulling the plunger directly. The white
deck non-skid is terrific, though it might fare better slightly tinted because
white is so harsh on the eyes in bright sunlight. The flush anchor locker on the
foredeck encloses a manual anchor winch and provides access to the under-deck
roller furler. Cabin top handrails are stainless for low maintenance, but
unfortunately they do not extend forward of the mast. The deckhouse sides and
cockpit coamings slope gently. This, combined with a little extra deck camber,
is likely the result of styling considerations but the trade-off is that getting
around ends up more difficult than necessary, especially on the leeward gangway.
Generally I like the styling of Beneteaus, specifically boats of theirs such as
the Oceanis 400, but to my eye the Beneteau stylists let their pen get away from
them on the exterior of the 42s7, avoiding somewhat the principle that form
should follow function.

Despite this the boat has many good safety features. For instance, she is one of
the few boats we sailed in 1995 that included as standard equipment
jack-line-attachment pad eyes on the foredeck and side decks aft; unfortunately
safety harness pad eyes in the cockpit were not provided. Any serious offshore
vessel should be fitted with strong pad eyes low in the cockpit and close to the
centerline, at least one by the companionway and one by the wheel, and it is
best to fit these during the manufacturing process because so many new owners
are loath to drill holes in a brand-new boat for that purpose; worse yet, they
may drill in the wrong place. The mast is an aluminum Blue Label by Sparcraft,
featuring slightly swept-back double spreaders and discontinuous rod rigging. It
is stepped through the deck for extra stiffness and security. The cruising mast
is stiff enough to make runners unnecessary. The full-battened mainsail is fit
with conventional slides but still it hoists easily. For ease of handling, the
mainsail is equipped with lazy jacks and the jib is on a manual-control furler.
Beneteau has done an excellent job of color-coding control lines — black jib
sheets and halyard; white mainsheet and main halyard; red and green mainsail
reefs; blue traveler and jib-lead control lines.

The 42s7 is available with either a 7’7″ draft performance keel or a 5’8″
shoal-draft keel. One of the boat’s rudder bearings is fit into the bottom of
the boat. The other bearing is mounted in the top of a large fiberglass cone
that is built up from the boat’s bottom. I would prefer to see the upper rudder
bearing mounted in the deck or under the helmsman’s seat for better support and
to increase the effective distance between rudder bearings, but the cone bearing
condition does include a wide base at the hull interface and a thoroughly
substantial lay-up schedule throughout its breadth. The 42s7 subscribes
typically to Beneteau construction ideology with both hull and deck reinforced
structurally by interior fiberglass liners. Bulkheads are slotted and glued into
grooves molded into the deck liner. Going below, the ladder descends at a user-friendly 30-degree angle, and the
edges of the steps are curved up to 27 degrees at each edge to keep one’s foot
from sliding off when heeled. Access to the engine is quite straightforward,
accomplished by lifting the stairs or unhinging additional access doors in the
after cabin enclosures.

The airy interior features double staterooms fore and aft, each with a dedicated
head. Aluminum handrails along the interior cabin sides are well placed.
Ventilation occurs by way of two Dorade boxes, four opening Lewmar hatches and
four large opening portlights on each side of the cabin. To my mind the Beneteau
stylists again promoted form over function; the ports open outboard so that
lines and feet are apt to catch on them when they are deployed under way.
The galley benefits from excellent execution with lots of counter space. The
icebox is notably large, the propane stove easily gimbals to 40 degrees on
either tack and its recess is fit with a stove protection bar for the cook’s
safety.

Even with its subdued cruising rig, this boat sailed better than many of the
“cruising” boats we tried in the 1995 Boat Of The Year competition. For those
who like the unique styling of an upscale European production boat combined with
good sailing qualities and solid construction, this one deserves serious
consideration.

I love the look of traditional boats, but I am very glad that there are
successful companies out there that offer modern styles from which cruisers in
recreational sailing of all ilks can choose. Style can vary,as long as
structural integrity and safety are not compromised. After all, even schooners
were modern once upon a time. What I do like about Beneteau is the notion that
the company understands how to build cost-effective boats with modern composite
technology both inside and out. Their efficient methods guarantee a product of
consistent quality. I also admire boats that sail well and minimize maintenance
demands. Boat owners are hard pressed already to find enough precious time to
enjoy their sport — which should be sailing, not hanging at the dock
maintaining their craft.

The Beneteau 42s7 is a cruising boat with terrific performance potential. In a
moderate breeze on the September day we tested the boat, the Bruce Farr-designed
hull slipped easily through the water and responded beautifully to the helm. In
10 to 15 knots of wind, driven by a full main and #1 genoa, we coaxed the boat
into trucking along at seven knots at 20- to 25-degrees of heel without a lot of
effort. We sailed the cruising version with the standard rig that carries 771
square feet of sail area (conventional main and 100-percent jib) and drags the
5’11” iron wing keel. For those who are uncomfortable with iron keels, a lead
shoal-draft keel is available in a 5’8″ version. The racing 42s7, which only a
few owners have selected since the model was introduced in 1994, carries about
85 square feet of additional mainsail, the same foretriangle, a spinnaker
package and a lead bulb keel that draws 7’6″.

Beneteau also offers two interior plans for this boat — both styled by Philippe
Starck — finished with ample varnished pearwood molded into the curves that
typify modern French production interiors. The “owner’s” version has a double
stateroom aft with an adjoining head, and a double forward with its own private
head. In this version, the galley is beside the engine compartment and is
U-shaped, an arrangement preferred by a majority of American sailors. In the
“three-cabin” version, two aft cabins share a head; the third cabin and another
head is forward. The galley is opposite the dining area.

Beneteau’s Marion, South Carolina, plant has built more than 30 of these
42-footers, most to the owner’s plan. The base price as of September 1995 was
$172,900, which corresponds to a boat quite thoroughly outfitted. A new boat can
be delivered within two to three months following placement of an order. In all,
the 42s7 is a spirited performer and a good production boat deal.