This Spanish design, built in Italy, cruises or races with speed, style, and stability. A boat review from our August 2008 issue 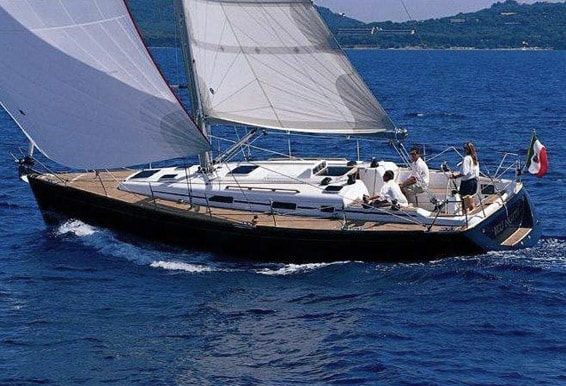 With a tapered cabin house, uncluttered decks, and elegant Italian interior design, the Grand Soleil 40 has a classic look. Like Botin Carkeek’s raceboats, the hull has a longer waterline, reduced wetted area, and a deep, efficient rudder and keel designed and built based on research by the automaker Ferrari’s aerodynamics department. The hull laminate consists of unidirectional fiberglass and vinylester resin, with a cross-linked PVC foam core called Termanto used above the waterline and in the deck layup.

Bonded inside the hull, an epoxy-coated galvanized-steel grid system absorbs the loads from the chainplates, keel, and mast step. Cruising World’s team of Boat of the Year judges agreed that the boat felt remarkably solid, but we wondered about potential long-term problems with the mild, or low-carbon, steel. Grand Soleil representatives, though, assured me that rust and corrosion don’t become problems over time, and they also pointed out that the entire grid is accessible for inspection by way of screw-held sole panels.

The GS 40 has a sleek and purposeful deck, with halyards and reef lines led aft under the coachroof. Like many new designs, however, cabin-top handrails don’t extend ahead of the mast, so going forward in a blow may be dicey. I did find that the optional teak decking provided excellent traction and the side decks were easy to navigate. With the adjustable genoa tracks tucked against the cabin side, the only potential impediments are the outward-opening ports in the long cabin windows.

Some of the same features that make the boat fast and easy to control also call for vigilance on the part of the crew. The long, low boom maximizes sail area but can be an occasion for head banging, and the convenient location of the Harken traveler-just forward of the wheel-means that a slack mainsheet could foul the binnacle when changing tacks from reach to reach.

Moving around the wide cockpit was easy, but I’d have appreciated foot braces. Our test boat was equipped with only one set of cockpit winches, so the mainsheet led to the cabin top, out of reach of the helm. With a second pair, the double-ended sheet can be led to primaries close to the helm, at either end of the traveler, and that’s an option most owners buy. The 12-inch bridgedeck, required for European Union certification, should do a good job of keeping the interior dry in case of boarding waves. The companionway boards have a neat self-stowing system, but when they’re closed, there’s a finger-width gap underneath, which is something to address before heading offshore.

For such a high-performance boat, the Grand Soleil’s interior is remarkably inviting, with cherry-stained mahogany and a wide-open feel. A choice of one or two heads is offered in the three-cabin layout. The substantial master cabin forward (with optional en-suite head) boasts a queen-size centerline berth. I always climb into berths and turn on the reading lights to see if they’re usable, and the Grand Soleil was up to my test.

In the main saloon, the C-shaped dinette includes a stand-alone bench on centerline, which also provides back bracing for the cook in the in-line galley to port. The countertops have excellent fiddles, but the upper lockers lack any means of restraining the contents. The deep, stainless-steel double sink has an easily accessible seacock that may need to be closed against flooding when the boat’s well heeled on starboard tack. The small, two-burner stove has room to swing if the factory-installed rubber stop is removed; cruising cooks may want to install a stove guardrail.

I find it distressing that many new boats-even those intended for long-distance cruising-have navigation desks unfit for anything but half-size chart kits. Not this boat. While the nav area has lots of extra space in which to add more electronics and a desk ergonomically designed for laptop use, it also has space to spread out a full-size chart. The electrical panel is neatly installed, as are all of the systems, and drip rails under the ports help protect electronics from damage.

Opposite the nav desk is the main head and shower. Twin quarter cabins with standing headroom, hanging lockers, and double berths extend under the cockpit. The split mattresses allow lee cloths to be rigged for use as sea berths. Panels in each cabin and under the companionway ladder provide access to the engine.

On the day we test-sailed the boat, the wind was gusting into the low 30s. We assumed that we’d tuck in a second reef but soon realized it wasn’t necessary. With the genoa partly furled and one reef in the main, the boat felt solid and under control. The standard sails set very nicely when reefed, and steering was a dream.

The Grand Soleil should be a nimble upwind boat: Even in fairly heavy winds, steering through constant puffs with less-than-perfect sail trim, we tacked through 110 degrees while going more than 8 knots. On a reach in 25 knots the G.P.S. showed 7.4 knots speed over ground.

The Grand Soleil 40 is seriously fun. After sailing it-and gushing about the exceptional helm, the stability, and the powerful big-boat feel-our team of judges noted the price: $350,000 seemed low for so much boat. For club racing, daysailing, or coastal cruising, the Grand Soleil 40 deserves serious consideration. With a few minor additions and changes and an experienced crew, I wouldn’t hesitate to sail it offshore.

Stacey Collins was a 2008 CW Boat of the Year judge.