The present-day S&S design team went to work updating the 1935 plumb-bow racer Babe to contemporary styling and standards. The result was sensational—a yacht that married Stephens' timeless vision with state-of-the-art gear and technology. 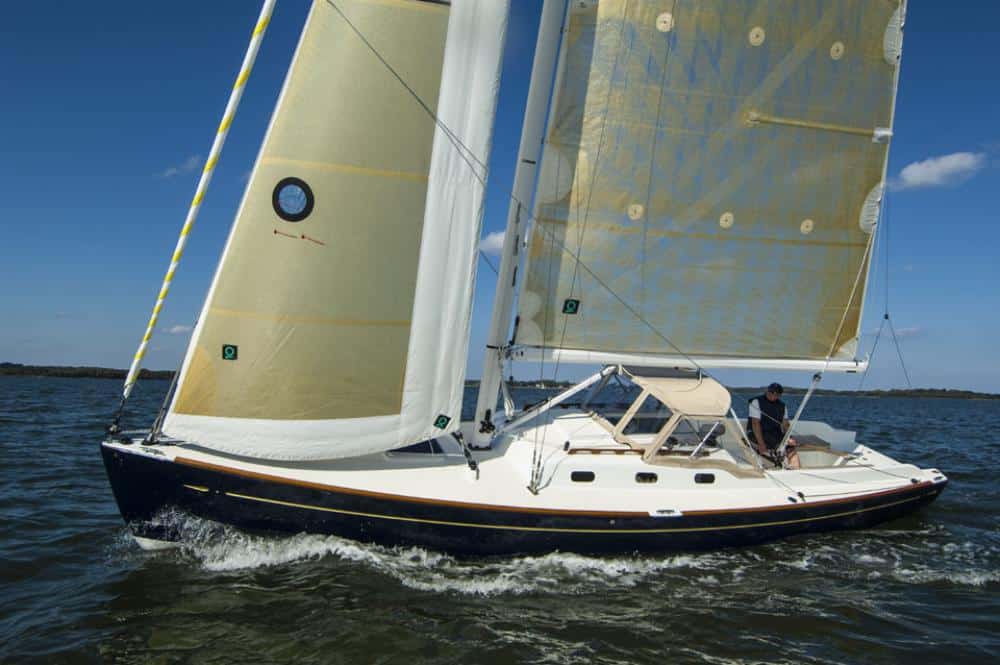 The back story on the handsome Sparkman & Stephens 30 is pretty darn good. Originally designed in 1935 by S&S (founded by the legendary Olin Stephens), the custom 30-foot-6-inch yacht was called Babe and wreaked havoc in racing circles on the Florida waters where she was based. With a purposeful plumb bow, maximized waterline length, and plenty of sail area, she bore all the hallmarks of a classic Stephens design. In 2005, three years before he died, when Stephens was asked about his favorite all-time creations, “Number 97, Babe” was one of the answers.

With that in mind, the present-day S&S design team went to work updating the boat to contemporary styling and standards. The wooden hull and deck gave way to a thoroughly modern laminate of E-glass and vinylester sandwiching a divinycell foam core. The full keel was replaced by a dynamic, 5-foot-6-inch fin with ballast bulb and a deep, separated, high-aspect rudder. For auxiliary power, a 14-horsepower Yanmar diesel was installed with a saildrive. Coupled with the boat’s singular, understated profile above the waterline, the result was sensational—a yacht that married Stephens’ timeless vision with state-of-the-art gear and technology.

Two things that didn’t change were the narrow, 8-foot-3-inch beam and the tiller steering. That combination, along with a few other notable features, earned CW BOTY judge Alvah Simon’s full attention. Though our test sail was conducted in just 8 to 10 knots of wind, the S&S 30 registered upwind speeds of more than 7.5 knots.

“I like the long, lean look and how such boats perform to windward,” said Simon. “Sometimes that results in a tender boat, but not here. Because the builders used lighter materials, the displacement is just 5,800 pounds. But the ballast ratio is 43 percent, which means almost half of that is in the keel. And this boat is just a joy to sail. It tacks like a ski carves. It has great maneuverability. And it’s certainly one of the best-looking boats out there. There’s beauty in simplicity.”

Unlike the other boats in the 2013 Boat of the Year sampling, the S&S 30 is best served as a dedicated daysailer. While there are basic accommodations below, the designers didn’t sacrifice the long cockpit for interior volume. At a fully equipped, sailaway price of $159,000, it isn’t an inexpensive boat, but compared with many of the “classic daysailers” on today’s market, it does represent good value.

On top of all that, it’s been touched by the genius of Olin Stephens. As they say in the commercials: priceless.