I’ve never seen any place like this place. It seems to have everything, absent the drawbacks of having everything.

This is a glimpse of Snyder’s Mercantile. The food isn’t priced like Safeway, but the selection is good. That cash register has been there for a long, long time and is still used. Windy Robertson

I’m down below with Eleanor, cleaning up after our passage and preparing dinner. Del Viento is side-tied to a dock and she gives gently under the weight of Windy and Frances returning aboard.

“You guys are just in time, dinner’s ready—what’s this place like?”

Windy doesn’t answer right away, she just sits down kind of quiet and serious-like. “Are you sure you want me to tell you? I think you should see for yourself.”

I laughed, in 14 years of marriage, I’ve rarely seen her dramatic side. I look at Frances for clues, but she’s already engaged with Eleanor, apparently unaffected by the walk through a new city. “Why are you acting weird, of course I want you to tell me.”

“I’m just going to say this: of all the places we’ve been the past couple years, I would choose to settle here.”

“You were gone only an hour, what could have blown you away? You don’t do hyperbole like this, that’s my department.”

“You have to see for yourself, tomorrow.”

I stuck my head out the companionway to take another look around, to see if I’d missed something obvious. Beyond the collection of about 20 boats on the docks around us, a row of small buildings, mostly homes, stood on stilts along the water. About a mile away, this strip stretched out of sight, around a bend. A short concrete pier jutted out.

I didn’t get much else out of Windy overnight and in the morning, we all headed into the city.

Wait, I’m sorry, city doesn’t work. It’s accurate, but we’re in Southeast Alaska, a place where city means something altogether different than what’s in your head. Comparing cities of Alaska to cities of the Lower 48 highlights the absurdity.

For example, what’s the largest city in the United States? Do you know? It’s Sitka, Alaska—encompassing over twenty-five-hundred square miles across two islands. And though huge Sitka is home to a scant 9,000 people, that’s enough to make it the fourth-most-populous city in the entire state (after Anchorage, Fairbanks, and Juneau).

So the four of us walked into this particular incorporated city of 104 people. We followed a narrow dirt trail bordered by stilted homes and a dense forest. Each home was personalized and appeared to have evolved over time. We herded the girls off the road for an approaching ATV.

“Hi there, please don’t stop, don’t step aside, as a pedestrian you have the right-of-way here. Did you just arrive by boat?”

“Well, welcome. Be careful of the nettles growing along the side of the road…I think the cafe is open this morning.”

Before riding off, he introduced his daughters, a preschooler sitting on his lap and clutching a paper bull’s eye, and a girl Eleanor’s age behind him, a BB-gun rifle across her lap. They were on their way to target practice.

By law, there are exactly two trucks and no cars here. The trail is only as wide as the city’s small fire truck and a pickup used to deliver heating oil. And there really isn’t a use for a car anyway, because though we were on Chichagof, the fifth-largest island in the United States (after Hawaii, Kodiak, Puerto Rico and Prince of Wales), and though this island is home to several other towns and cities, no roads connected this place to any other place.

The Part(y) Time Café was open, serving quiche, scones, and cinnamon rolls. The walls and shelves inside were filled with the work of local artists. Sated, we crossed the road and explored the garden-shed-sized book exchange. Outside, the town carried on, the door to Snyder Mercantile opening and closing for patrons of the city’s single store, in continuous operation since 1899.

And then, I saw the heart of the place, the reason it is where it is: the public bath house. It’s the town’s treasure, fed by natural hot springs and owned by no one and open to all. There is a committee (formed in the 1930s), independent of the city, which oversees all things related to the bath. No clothing or bathing suits are allowed and hours for men and women are long-standing and strictly enforced.

I’ve never seen any place like this place. It seems to have everything, absent the drawbacks of having everything. Here is a proper, self-contained community, a functioning city of fewer people than attended our wedding. There is a mayor, fire station, store, school, library, café, church, free WIFI, farmer’s market, historical society, post office, seaplane terminal, harbor, and a glorious public bath house. City revenue comes from slip fees (modest), a sales tax (2%), and a percentage earned from the commercial fishing transactions that happen in the surrounding waters. There is tourism too, but it is strictly managed, limited to those who find their way here aboard their own boats, sea plane, ferry, and the micro-cruise ships (roughly 30 passengers and fewer) that are all over Southeast Alaska.

In fact, this place made national headlines in 1998 when they turned down a cruise ship company’s bid to stop here. The company ignored the city’s plea to stay away. One summer morning, a ship arrived, dropped the anchor, and began disgorging its 120 passengers. The town reacted like a sea anemone that’s been touched. Everything was quickly shuttered and a few residents lined the walk, smiling and apologizing as they handed out leaflets to confused passengers, explaining that they were not welcome, that the city didn’t have (and didn’t want) the infrastructure to support their numbers. No large ship has called here since.

I don’t mean to paint a picture of a Dionysian commune or a new-age socialist’s utopia (that’s not my style—and I’m talking about Alaskans here, after all). This is a place where an eclectic group of people live independently, together. Here are 104 entrepreneurs, farmers, fishermen, artists, writers, kids, grandparents, Catholics, atheists, homeschoolers, schoolers, construction workers, historians, and woodworkers doing their thing without a police station or hospital.

It’s vibrant and that element is celebrated. Nobody in this community wants this place to die the quiet death of a seasonal retirement community. Families are needed and appreciated. The school is closing this year because enrollment dropped below the district-mandated ten pupils. That means a few jobs are lost. That means families must adapt or they may leave. That could begin a spiral that would diminish the quality of life for everyone. We thought seriously about changing our plans, staying over the winter. We even did our best to recruit another family we thought might be a good fit (and it turned out that this other family knew all about the place and had gone through their own deliberations, ultimately deciding the timing wasn’t right for them either).

I understand that the character of any place is an intimate thing, truly known only to its residents. I would never have thought that two days in a place—especially a place that requires socks in the winter—would suffice to make a life-changing decision. But this little place stayed with us, on our minds and dominating our conversations over the past couple weeks. I’ll tell you now: when our cruising days come to an end, you are likely to find our family rooted here. 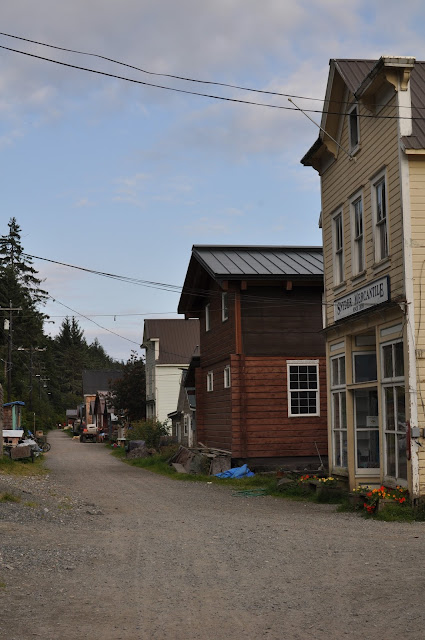 This is a shot looking back down the dirt walkway towards the docks. 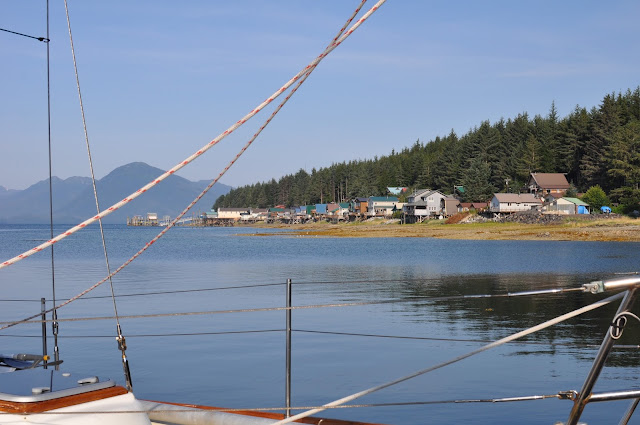 Here is a view of the place from the boat. 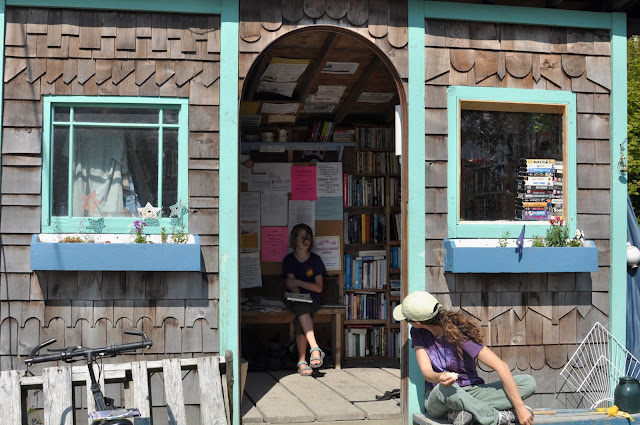 This is the book exchange. Not pictured is the nice, modern library about a quarter-mile from here, befitting a town 50 times the size. Same for the school, built with oil money and overkill, but nice. 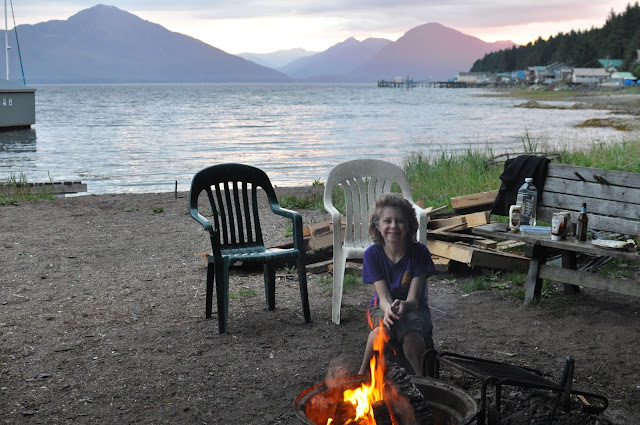 And this is the community fire pit. That’s Del Viento_’s mast on the left._ 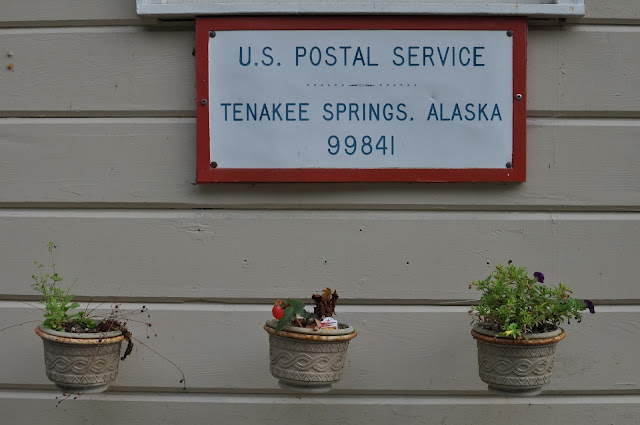