Skip to content
Advertisement
How To Use the Right Hoses

Use the Right Hoses

Pay attention to standards when working on sailboat plumbing. 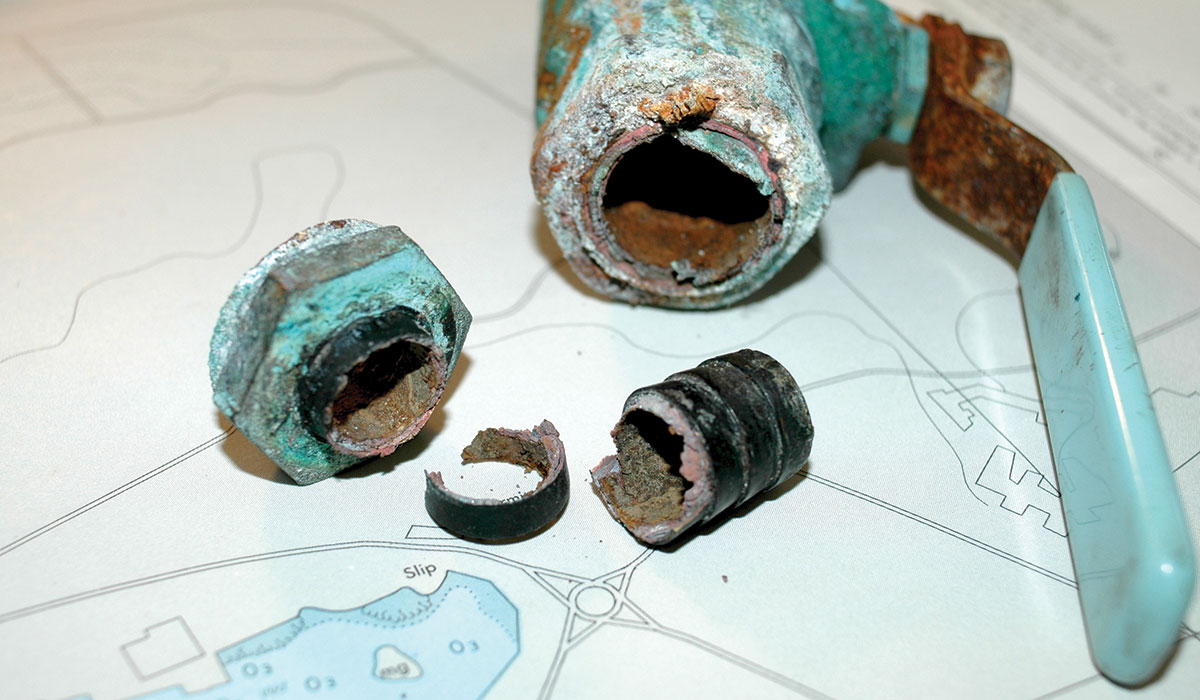 While at first glance it looks similar to bronze, because of its tendency to “dezincify,” brass should never be used for raw-water applications. Steve D’Antonio

A boat owner recently asked me about a design she was working on for a raw-water manifold, one that was to be made from PVC pipe. My advice: “If you can’t stand on it, it’s probably not robust enough.” While that test method is less than quantifiable (for example, I weigh 145 pounds, so what works for me might fail for others), it generally addresses the issue of raw-water plumbing, which in far too many cases simply isn’t properly designed or installed, at least not in a manner that imparts the level of durability and reliability required for such components.

Apart from seacocks, which I’ve ­covered in previous columns, raw-­water plumbing includes any means by which seawater is supplied to, or discharged from, a range of equipment, such as engines, generators, watermakers and air-conditioning systems; deck, sink and shower drains; and sanitation discharge systems. For the most part, if it will result in flooding if it fails, it falls into the ­category of “raw-water plumbing.”

Hoses used for this application must be specifically rated for raw water (for instance, “marine wet exhaust” or “SAE J2006R”). While those examples refer specifically to engine applications, in fact, they are far broader in their coverage. In other words, if the hose is good enough to carry exhaust discharge, and is rated and labeled for this use, it’s rugged enough for most other raw-water applications. This unsupported seawater distribution manifold is far too fragile for such a critical role. Steve D’Antonio

Typically, hose of this sort is either EPDM-based (this can be black or white rubberlike material) or silicone, which is usually blue or red. It’s critically important that the hose labeling include the words “wet exhaust SAE J2006R.” In the absence of this label, the hose’s suitability for this purpose is unknown. Clear PVC hose, sometimes called “red trace” because of the red fiber some versions contain, is not designed to be used for raw-water applications, and yet I encounter it on a near-daily basis in this role.

While silicone offers certain attributes, it’s not always more desirable than EPDM hose. Silicone is extremely flexible, and thus well suited for absorbing movement and vibration; for that reason, it’s often used in exhaust systems. However, it’s also more expensive and less resistant to chafe, kink and crush damage. For the majority of raw-water ­applications, where extreme flexibility is not necessary, a high-quality EPDM hose makes the most sense. Metallic plumbing used in raw-water applications must be both rigid and corrosion resistant. Bronze is the most popular material; however, it’s available in a dizzying range of alloys, some of which are not suitable for exposure to seawater. Generally speaking, copper alloys must contain less than 15 percent zinc (the less the better) in order to be safely used with seawater. Under no circumstances should brass be used. Its high zinc content, typically 45 percent or more, makes it susceptible to “dezincification” and structural failure. While there’s no definitive means of ­determining zinc content outside of lab testing, the more yellow a copper alloy, the more zinc it contains.

Because of its lack of tensile strength and modulus of elasticity, the use of PVC is frowned upon where raw water is concerned, with very few exceptions. It is occasionally and successfully used in air-conditioning systems, for ­distribution and return manifolds. When used in this raw-water role, it must be schedule 80, and fully supported and protected from loose gear and misplaced feet. Hoses must not impart excessive strain on PVC plumbing components, and PVC plumbing must never be directly attached to ­seacocks, strainers or other below-the-­waterline gear.

Finally, remember that step-on-it test. If you have doubts as to whether it will stand up to this measure, it’s probably not robust enough.