Tim Zimmermann gets the scoop from Webb Chiles on his latest circumnavigation dream, which he plans to sail on board the Moore 24 Gannet.

Webb Chiles in his natural habitat.

If you are a sailor and a wanderer, here’s someone I definitely think you should know.

Webb Chiles is an American original, a sailor, poet, and explorer who has circumnavigated the globe five times (once in an 18-foot Drascombe Lugger called _Chidiock Tickbourne_). In 1975 he became the first American to solo around Cape Horn.

In case it is not clear, he is not afraid to live a full life (he’s also been married six times), and to his credit appears to treat adventure as a basic necessity, on par with breathing. Here’s how he describes himself, and introduces his website:

“People who know of me at all probably do so as a sailor; but I have always thought of myself as an artist, and I believe that the artist’s defining responsibility is to go to the edge of human experience and send back reports. Here are my reports.”

Unsurprisingly, Chiles, now in his 70s, is not done yet. His wife, Carol, expects him to fall off a boat in the middle of some ocean at age 90. In preparation, Chiles has put together a Requiem playlist he’d like to hear in his final moments. But until that moment, and perhaps leading to that moment, he has plans.

His next adventure is another circumnavigation, naturally with an interesting wrinkle: His boat choice is a Moore 24, which he has called Gannet. 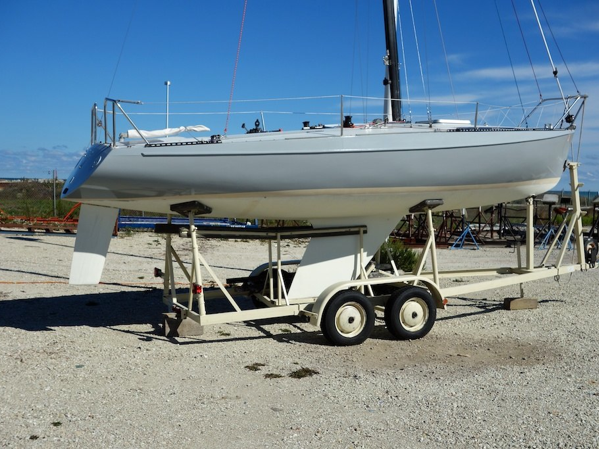 I’m inspired by what Chiles has done with his life, and I love what he is about to do. So I contacted him with some questions, and he was kind enough to respond. Here is an online Q&A. And if you would like to know more about Chiles, all his books are available here (many in Kindle format).

TZ: What is your timeline for setting off, and what route are you contemplating?

WC: Gannet, as I’ve named my Moore 24, which is hull #40, is due to be trailered from the Chicago area to San Diego, starting October 11. As you may know from my journal, I’ve gone blind in my right eye this year, and while I can drive, I don’t much like to, so I’m paying a professional for the tow.

I hope to spend about three weeks every other month this winter on the boat, and if I think she and I are ready next summer will sail to Hawaii. Beyond that I don’t know. Partially it depends on my experience on that passage. All my other voyages were planned. This one I’m making up as I go along. I don’t even know whether I’ll go east or west. I’ve gone west via Panama three times. East via Cape Horn twice. Obviously it is the Horn’s turn, but I don’t know if Gannet can survive down there.

TZ: How did you settle on the Moore 24, and what are its strengths and weaknesses for the voyage you have planned?

WC: I chose a Moore 24 because I wanted a new-to-me experience, and, after sailing_ Chidiock Tichborne_, the 18′ Drascombe Lugger, I have a special affinity for small boats. That Moore 24s have often been raced from the West Coast to Hawaii is significant, as is their reputation for being extremely well-built, solid sea-going boats. Another Moore owner wrote to me that they will take you where you want to go and bring you back.

Even though Chidiock Tichborne weighed less than half Gannet‘s 2050 pounds, she wasn’t exactly an ULDB. I expect to sail faster in Gannet than in any other boat I’ve owned, and am looking forward to that. I also love the Moore’s idiosyncratic looks. 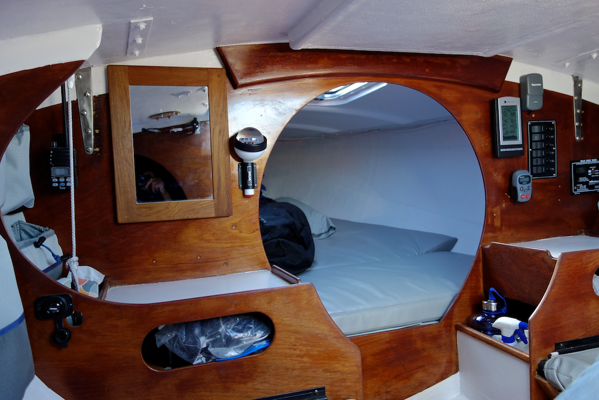 My open boat voyage in Chidiock Tichborne is significant to my sailing Gannet. Gannet will not be comfortable, but compared to Chidiock Tichborne, she is the QE2. But then I am thirty years older, which makes it interesting.

I have no doubt that Gannet can complete a trade wind circumnavigation, within the vagaries of time and chance. No one else has ever done so, but I’ve pushed limits before. Whether she can go the other way, I don’t yet know.

One weakness is that her transom is so thin it has to be re-enforced to take a self-steering vane. I thought this to be the case and that has been confirmed by another Moore owner, who has a vane.

As I’m sure you know, most Moore 24s are on the West Coast. I’ve never seen a Moore except my own, and other owners have been very generous with advice and information via email.

TZ: This will be your sixth lap. What keeps taking you back?

WC: The flame hasn’t gone out. Both Tennyson and the Greek poet, Nikos Kazantzakis, thought Ulysses would not be content to settle down in Ithaca, and as an old man set out again. I’ve completed circumnavigations in four successive decades–two in the 2000s–and would like to make it five. Also I’d like to go around again in my 70s–I’ll be 71 in November. And I simply like sailing oceans, settling into the pure rhythms of the monastery of the sea.

TZ: What, if anything, do you tell sailors who aspire to sail around the world?

WC: I treat all questions I receive seriously and with respect, but I neither encourage nor discourage. I do try to give people the benefit of my experience, while not claiming that my way of doing things is the only way.

There is a lot more of Chiles’ thinking, writing, poetry and photography to explore here. Spend a few hours, and then read some of his books. I doubt you’ll think about life and sailing in the same way.