Advertisement
How To On Passagemaking, Luck and What We Did Right

On Passagemaking, Luck and What We Did Right

We did a lot right during this passage; some of it intentional, some of it serendipitous... but here is what we learned and tips I can share based on our experience venturing offshore and covering 800 miles over the course of five days, non-stop.

With our first long-ish passage behind us, I find myself reflecting on how successful it was and how smoothly it went, no small feat for a boat at sea for five days. There are several reasons for this: First of all (let’s be real here), we were lucky. I believe strongly that those of us who take to the sea depend on a fair amount on good old-fashioned L-U-C-K from time to time (don’t we all?), and thankfully, it was on our side during this particular passage. It is also my belief, however, that we create our own luck in the form of preparedness (anyone remember the “black box theory“?) - particularly at sea – and that the two, let’s call them “dumb” luck and “created” luck, dance precariously in a yin/yang type of ballet.

We did a lot right during this passage; some of it intentional, some of it serendipitous… but here is what we learned and tips I can share based on our experience venturing offshore and covering 800 miles over the course of five days, non-stop:

1. Route Planning: Scott poured over the charts and scoured the internet for information on our trip. Unfortunately, there was not too much out there as a) most (smart) cruisers avoid passages completely to windward and b) most people who do make this passage start much further north, and much earlier in the season in order to take advantage of trade winds. Despite the lack of info out there for our particular set of circumstances and coordinates, Scott and I read accounts of the trip and had a pretty good idea of what to expect. Namely: lots of motoring, bashing headlong into easterly trade winds, and a potential puke-fest of epic proportions. Fun, right?

2. Prepare for the worst: I know, this sounds pessimistic, but hear me out: if you prepare for the worst, you will either be ready when the worst smacks you square across the face OR (the better option) you will be pleasantly surprised when it shows up at your door step like an innocent, water-logged kitten looking for shelter instead of the roaring lion it’s shadow foretold. We had read lots of accounts of strong easterly trades and mind-numbing upwind slogs complete with bashing into twelve foot ocean swells for days on end, and that is what we prepared our boat and ourselves for. The fact that our trip wasn’t that bad made it all the better, and because our boat was so well stowed and prepped, we enjoyed a nice, drama-free ride complete with evening sing-a-longs in the cockpit. (Okay, not really).

3. Watch the Weather: Scott watched weather for about a month before our passage; looking for patterns and trying to identify when the trades would lie down a bit and allow for some nice, easterly motoring. The fact that a weather window presented itself just as our crew arrived was – of course - dumb luck. You cannot plan stuff like that. We also subscribed to a professional weather routing service which we utilized underway (via SSB) to alter our course and optimize our path. This proved to be very useful.

4. Know your Limits: We had two volunteer crew aboard to help Scott make this delivery because initially Isla and I were not going to come (see #2). We ended up joining the roster after all, and it was fantastic (essential?) to have four extra hands on board. These days, my number one priority is being a momma to Isla and – truth be told – she is a handful (actually, two handfulls) when she’s awake, making me a less than reliable offshore crew member at the moment. Having a working crew of three guys with me as a mommy/floater/galley slave made this passage much better – for all of us. The guys maintained a two hour on/four hour off watch schedule which was very easy and ensured everyone was well-rested.

5. Pre-make Meals: Holy moly was this a lifesaver! We ate incredibly well the entire trip and (wait for it…..) I am going to give myself a little pat on the back for this fact. Actually, I am going to give myself a full-blown “whoop whoop” for my culinary efforts. Me pulling off five nights of palatable boat meals is, in my little world, akin to Armstrong’s first steps on the moon: A small step for man, a huge step for Brittany…or something like that. Thanks to The Boat Galley Cookbook

, a very large refrigerator and a couple days of slaving away in the galley pre-departure, I made six casserole-type meals in “bake-and-serve” plastic containers to keep and make underway. Cooking on a boat (the chopping, the cleaning, the prep…) is challenge enough, cooking on a boat at an aggressive heel while bashing into 4-8 foot rollers is significantly harder. All I had to do was pre-heat the oven, slide in the dish, wait 30-45 minutes and voila! warm, tasty meals for a hungry crew. I also made sure there were plenty of ready-to-eat snacks – both healthy and junky – available as well. We did not go hungry on this passage, that is for sure. Another added bonus of pre-making meals? Less garbage underway. We only had one small bag of garbage at the end of five days.

6. Shake Down: This is where dumb luck came into play for us in a big way. We had not planned a shake down sail but the weather ended giving us an opportunity to sail from George Town to Long Island and it was probably one of the best (unintentional) things we did. It was a pretty aggressive sail: twelve hours in 15-20 knots of wind with seas in the 4-8 foot range. Not only did this give us time to get into sync as a crew, it gave the new crew members a chance to learn a bit about our boat, how she handles and – most importantly – it gave our gear a chance to break before we headed offshore. We lost our jib halyard at the end of the sail and fixing it in port was much, much easier than out at sea. The two subsequent days we spent in Long Island were also great for crew morale and boat prep. This turned out to be a key piece of luck that made our subsequent passage much smoother.

7. Quick Caffeine Fixes: The Aeropress coffee maker is still my first love, but it is not the most practical percolator while sailing head-first into six to eight foot ocean swells. Single serve instant coffee packets are the bomb, and they are your friend. I bought a veritable boatload of Starbucks Via instant brews on my last trip home and – say what you will about the ‘Bucks – it was good. Really good. And what’s best? It was easy. I boiled a thermos full of water every morning and whenever anyone (i.e me) wanted a cuppa joe, all they had to do was grab a mug, tear open the pack and pour in the water. Coffee snobbery has no place on the high seas people, sometimes you just gotta get your jolt and go.

8. Prep the Boat: We went overboard prepping our boat. The outboard motor? Stored down below under the v-berth. The grill? Stowed in our shower. The dinghy? Lashed to our bow despite the fact that our awesome davits are rated for something insane like ten thousand pounds. We checked oils, changed filters, topped of water and fuel and did all the usual visual checks. Furthermore, the interior of the boat was given the “tip over” test – meaning I went through the cabin and imagined our boat on her ear, and anything that wouldn’t stay put in an event like that, was moved. I am happy to report our cabin remained clutter and catastrophe-free. I also made lee-cloths for the crew which proved to be essential (and comfortable). 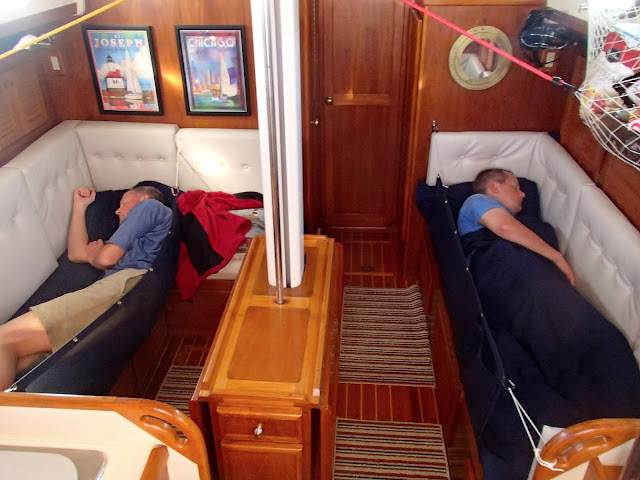 9. Pre-Medicate: The only time I have ever been seasick – and I mean actually puking seasick – came after a night of five (count them, five) dirty martinis. Friends don’t let friends sail hungover, folks. That still goes down as one of the worst days on the water ever. No bueno. But aside from that little blip on the radar – I don’t really get seasick. Despite this, I – along with the rest of our adult crew – slapped on a scopolamine patch the second we started our motor. No need to be a hero. Seasickness is not fun, especially if you’ll be at it for days on end and we were prepping for a bouncy ride to windward. The only bout of seasickness came from the one crew member who’s patch fell off and was not replenished, otherwise – we were all hunky-dory. Not too shabby!

10. Timing is Everything: I mentioned that luck made it so our weather window arrived just as our crew stepped off their flights and onto Bahamian tarmac. Dumb luck. BUT – when we went looking for volunteer crew, one of the stipulations was that they had to be available from the 9th to the 23rd of May. That obviously disqualified a lot of folks. We were adamant on this point so that we could have a large window to allow for a healthy amount of wiggle room to wait for weather, make repairs, etc. It worked out for the best, and – as luck would have it – we were even able to leave a day ahead of schedule because our crew was able to fly in early so that we could take advantage of the weather window as it presented itself.

11. Get Mental: No, I don’t mean go crazy (thought we almost did for a hot minute there). I mean mentally prepare yourself for the journey at hand. Do you estimate it will take eight days? Prepare for at least ten. Visualize yourself on the boat, day in and day out, for that length of time. Imagine the calms and the storms, how you will handle yourself, how it will feel. Envision how you will pass the time and keep your mind occupied. Picture the night watches, the day watches and visualize the smells, the sounds, the potential boredom, the motion, the monotony, the excitement… Great athletes are famous for envisioning entire games before they are played and while we might not be scoring any points out here – there is something to be said for getting your head in the game.

So that’s our (very long winded) $.02. What are your tips and tricks for long passages? Please share in the comments so we all can learn!

When two people, with the same life long dream of sailing around the world find each other, there’s only one thing to do… make it happen!
Scott and Brittany departed in 2010 with big plans to “see the world” from the deck of their sailboat. After sailing from Chicago to Trinidad via the “thorny path”, they are now back at it with their first baby and second boat. Check out all the juice at . 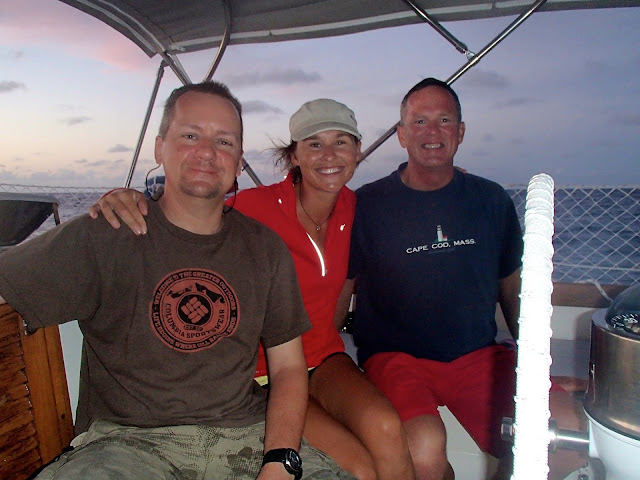 A Shocking Question: Is Your Shore Power Leaking?