Turns out, being stuck between a rock and a hard place feels kinda good. Who knew?

Since we can't really move towards our intended destination of St. Maarten due to weather, we've decided to - SIGH - throw in the towel and just cruise the British Virgin Islands while we wait for a weather window to move on. It's a rough life. They say if you can't beat 'em, join 'em. Well, we say: if you can't leave 'em, ENJOY 'em.

Scott and I have been here three times before, twice on vacation aboard other boats, and once on our old boat, Rasmus. While we had a blast during those previous visits, we weren't as captivated as we have been this time around. I can't quite put my finger on why this is, but we've pretty much fallen head over heels in love with these islands. So much so, in fact, that we're talking about basing ourselves here semi-permanently in the future. Perhaps the Universe has forced us to linger so that we'd take pause and have a good look around instead of just blazing through in a drunken stupor. Either way, we're pleased as rum punch it worked out this way.

Truth be told, it's easy to go lukewarm on these islands as nothing more than a playground for charter boats. Which, don't get me wrong, they are. I'll bet an arial view of this place in high season looks not unlike like the carnival game "duck pond" with oodles of Beneteaus bobbing around. "Too many credit-card captains"..."too expensive"..."too touristy"...."not authentic". These are all things we've heard from other cruisers and - not gonna lie - we thought those things too. As a vacation destination for the employed, this place fits the bill. But for experienced and salty live-aboard cruisers on a budget, there was more...or so we thought. But after ten days of hanging around these parts, we've fallen off our high horse.

So what makes these islands so great? Well, for one thing - they are spectacularly gorgeous. I'm almost exhausting myself with how often I've said "Wow!! It is soooooo beautiful here"! The dramatic landscape is nothing short of eye-candy; lush hillsides encompassing every shade of green jut out of the cerulean water at sixty degree angles, vibrant flowers dangle heavily in lavish bunches off tree branches, and lanky palms bow lazily over the sandy beaches as waves lap rhythmically on shore. Looking off in any direction you see the dramatic silhouettes of more islands in the distance like giant boulders that have fallen haphazardly from outer space, and you might even see four or five ridge lines taper off in a dusky haze. It's super gaze-worthy, that's for sure. There's a reason there are a gazillion charter boats here: people keep coming back for more because this place is like crack for paradise lovers.

Then there's the sailing. "We can sail just for the fun of it here!" Scott exclaimed on our first day out. Most cruisers rarely sail just for the sake of sailing; it's usually to get to some place and more often than not conditions aren't ideal for canvas. Here, however, there are so many places to go and because of they way this archipelago is situated you are almost always in "protected" waters, meaning you can sail in almost any condition to some awesome anchorage with great snorkeling, a pretty beach, and a killer sunset. What's not to love? (Okay, the overpriced beach bar kinda blows).

Last time we were here on Rasmus, we were spending $30 a night for moorings which is why we left in such a hurry. Like lemmings, we took moorings because everyone else did. Turns out, you don't have too (unless you are a charter boat, in which case most decree that you MUST take a mooring). This time around, we've anchored just about everywhere and it's been a piece of cake. We enter an anchorage, get away from the mooring balls and drop the hook. Granted, it's not high season so perhaps it's less crowded than it would otherwise be, but we're super thrilled that we can spend that $30 on tropical slushy rum drinks during happy hour and not on a mooring ball. With 275 of chain and a better than average anchor, we're more than adequately set to anchor here. (So far 20 feet is the deepest we've anchored, for the record).

Anyway, we're happy. We're having fun. And every now and then we even forget the fact that the weather folks are - as one Facebook follower so eloquently put - "running out of scary words to describe this upcoming hurricane season". Sigh. As much as we'd like to, this little love affair must end - for now. We got to fly south for the summer! 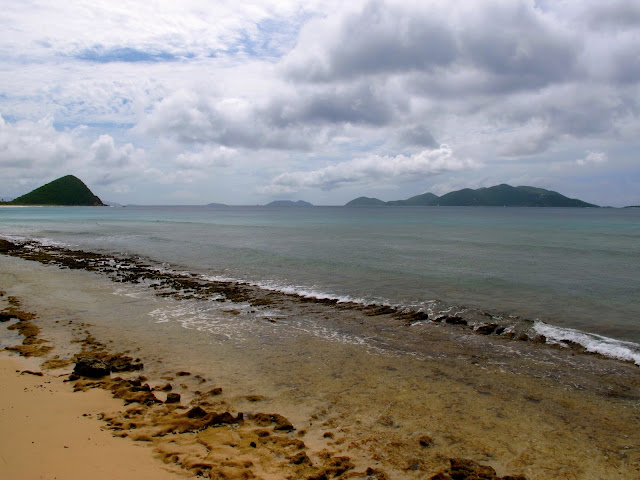