Skip to content
Advertisement
How To In Which I Fix Something

In Which I Fix Something

This story is an important reminder that solving any problem aboard a cruising boat nearly always takes longer than anyone ought to imagine. Such a little thing… Michael Robertson

There is no shortage of beer-in-hand/body-in-hammock stories that depict cruising as a carefree existence, free of the work and hassle that characterizes land-based life. And to be fair, neither is there a shortage of flashlight-in-mouth/body-upside-down-in-bilge stories that depict the cruising life for what it is: a lot of work and hassles landlubbers never know—in cool places.

This is one for the latter category.
Indeed, I had noticed that the medicine cabinet catch was loose, barely keeping the little door closed. And now that someone else knew that I knew, feigning ignorance was not an option. I set about solving this minor problem.

Now, good reader, how long should it take me, an average cruiser, to fix a loose door catch? The answer is two days. But I didn’t know this then. And that’s why this story is as much a cruising yarn as our recent trip to the San Juan Islands. This story is an important reminder that solving any problem aboard a cruising boat nearly always takes longer than anyone ought to imagine. Always, even after I’m reminded of this! (In fact, my inability to imagine the actual time—and cost—that any boat project will consume is what allows me to keep going. My ignorance is the magic that keeps me sane, that allows me to start another project, and another, each time armed with a fresh dose of misplaced confidence.)

So I grabbed my screwdriver from the drawer beneath the nav station and made my way forward to the head. Before even trying to tighten the screws that attached the catch, I notice it’s pointless. There is a crack, a split in the wood running through both of the tiny screw holes. I removed the catch to study the problem further.

The frame was split, but not badly, just enough to keep those screws loose. I thought about gluing and clamping the split. I’ve had success in the past with Gorilla glue, but it would be impossible to prep the surfaces (let alone squeeze any glue into the crack). I figured Crazy Glue might wick in there, but I feared it wouldn’t be up to the task, that the repair would fail as soon as I replaced the screws. I decided on a mechanical solution; I would use two additional screws to pull the two sides of the split frame together tightly. I would have to insert them from the back so the heads wouldn’t show and they wouldn’t get in the way of the door closing.

Such a little thing…
Only five minutes had elapsed, and I already had a plan.

In the aft cabin, I moved Eleanor’s stuffed animals aside to access my drill stored under her bunk. From my yellow tool chest under the v-berth, I retrieved my drill index. From a cubby underneath the dinette, I dug out my box of stainless screws. From behind the starboard settee, I found my #2 Phillips stubby.
Frances was now using the head, but no matter, I picked out the right screws, installed the bit I wanted for pilot holes, and waited.

I now have an arsenal of tools out and I’m on the job. I realize I can’t drill from inside the cabinet because the drill’s too big, but in a stroke of genius, I decide to drill through the outside, two tiny holes that I can cover up later. Yet when I go to start the first screw from inside the cabinet, I realize my Phillips-head stubby is way too long. I need a right-angle screwdriver and I’m pretty sure I have one, someplace.

Someplace. After thirty-five minutes of tearing the boat apart looking everywhere for the right-angle screwdriver I thought I had, I grab some long needle-nose pliers with a bend in the end. It’s difficult to start the first screw by hand, but once I do, I gingerly try and reach around and grab the screw head with the pliers, squeeze, and try and rotate the screw. It is very slow going, just a few degrees at a time, and only when the pliers don’t slip off the tiny screw head or I don’t twist it sideways.

“I thought we had a small black Sharpie in here.” I want a way to mark the head or shaft of the screw, just to assure myself it is indeed turning; increased resistance now causes the pliers to slip off more frequently.

And turning it is, though only every third try with the pliers is successful. Ever so slowly my little black mark rotates out of sight.

But I’ve stopped again, back in the salon looking for the tiny 1” c-clamp that was aboard the boat when we bought her. I realize it’s critical that the wood frame is held together tightly as I affix my screws.

I find the c-clamp and note I’ve been at this now for more than an hour.

I go back to trying to turn the first screw, still only a few degrees at a time. The further it goes, the more difficult it is. After about 20 minutes, I finally stop; there doesn’t seem to be a gap between the frame and the head of the screw.

I realize right off the bat the second screw is going to be more difficult; I drilled that pilot hole just a bit closer to the inside of the cabinet. After a while, I give up, the second screw only half in. I push on the crack a bit and realize they both need to be tighter to be effective, much tighter.

“I’m leaving this door for tonight,” I call to Windy, “I need to go out tomorrow and buy a right-angle screwdriver to finish.”

The next day, after a 15-minute walk, I’m at Capitol Iron, the nearest hardware store. The old-timer in the hardware department sucks air in through clenched teeth, his lips drawn, “Yeah, I know exactly what you mean, but we don’t carry those—but we should, they’d be right here. Sorry.”

But my spirts aren’t dampened. Even before he spoke, I came up with another plan.

Back on the boat, I gathered a couple tool bags from different lockers. With a short #2 Phillips bit fitted into a ¼” socket attached to a ¼” driver, I’ve got an improvised right-angle screwdriver. It’s a bit difficult to use, given that the broad head on the wrench buts up against the inside of the cabinet and doesn’t allow me to get a solid fit on the screw head, but it works. Within minutes, both screws are tight and when I remove the c-clamp, the crack is gone, the frame solid.

But then I notice that both sharp screws are poking an eighth of an inch out of the front of the cabinet face, right out the pilot holes I made. I go and get my Dremel.

With a metal-cutting wheel in the chuck, I grind down each of the sharp heads. Sparks fly and both little screw tips turn cherry red before falling off into the sink. The wood frame is scarred, but smooth. I attach the catch, successfully test the door, and begin the clean-up.

“What in the world was that sound? Are you grinding metal?”

“Nothing a little paint won’t cover. The medicine cabinet door is fixed.” 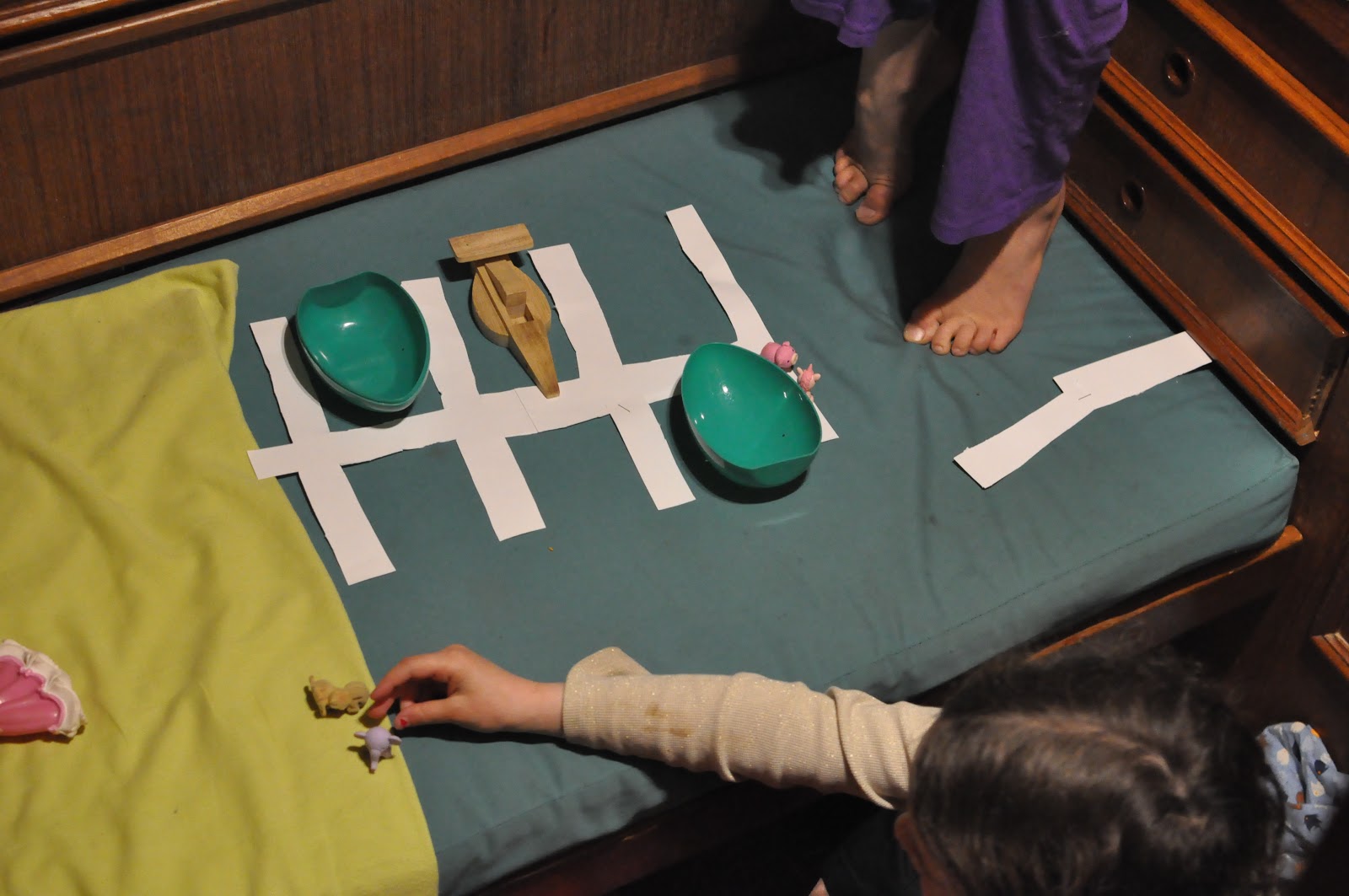 This is the bench between the girls’ berths in the aft stateroom. The green blanket is shore, the white paper slips in a marina. We clearly need to spend more time at anchor.