But unassuming Auke Bay is a jumping off point for Glacier Bay National Park, which is why some of the largest privately-owned yachts are here. Vibrant Curiosity—there’s a 27-foot MasterCraft ski boat still tucked away in the garage, hard to see in this photo. The boat is reportedly owned by a German—so why an English name and a London hailing port? Michael Robertson

I walked past striking people today as I climbed off Del Viento. Not striking in the fighting-for-improved-working-conditions sense, these were strikingly attractive, perfectly put-together people. There were a dozen of them, talking amongst themselves as they breezed by in casual clothes, everything about them so together, so flawless. I nodded as we passed. Our eyes didn’t meet. They smelled clean.

Now, it’s possible I might not have noticed this group were they, say in Paris, seated in a snazzy restaurant overlooking the rue des Petits-Champs, lost in a crowd of oenophiles. But we walked by each other on the transient docks in Auke Bay, Alaska.

But unassuming Auke Bay is a jumping off point for Glacier Bay National Park. This is the reason that some of the largest privately-owned yachts (Ice Bear_, _Athena_, _Lady Christine_, _Compass Rose_) are here, awaiting their owners, their guests, and their turn to enter the Park—just like _Del Viento. 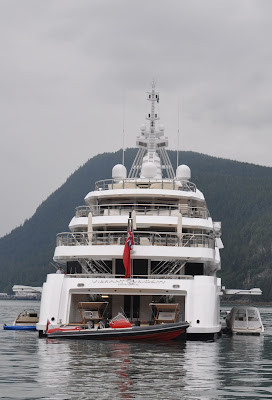 To put the size of that retro-snazzy inboard inflatable in perspective, that’s a 47-foot beam on Vibrant Curiosity_._

Windy’s brother and one of our nephews (Oliver) are flying up from San Francisco and then we’ll leave Auke Bay for the two-day trip to one of the most lauded cruising grounds in the world. (We’ll soon learn whether it lives up to the hype.) Anyone can enter 5,100-square-mile Glacier Bay, but the National Park Service requires reservations to limit the number of boats in there at any time. We got our seven-day reservation two months ago before leaving Victoria.

I continued to the top of the ramp where half-a-dozen red-jacketed crew busily unloaded fine-looking luggage from three limousines. I turned back to the docks to watch the striking people being helped aboard one of two Vibrant Curiosity tenders tied to the dock. They were little kids with their 30-something parents, they were 40-something couples, they were 60-something people.

I’ll admit I’d sell one of my kids for a week—okay, for a couple days—aboard the 280-foot-long Vibrant Curiosity_, looking striking and smelling good. Windy probably won’t let that happen, but I can take solace in something else. Aboard _Del Viento, sharing a dock with these obscene yachts, I’m reminded of the power of even a modest, capable boat, able to transform the forces of nature into motion, along a big blue path to some of the most desirable places in the world. No matter what you look like (or smell like).
--MR