They say that one can get used to almost anything, if done often enough. I wasn’t so sure of that when we got up at first light to start locking up into the Champlain Canal; however many locks we transit—and we had come through a good deal of them by now—getting safely into the lock chamber is always a bit tense. A speed which feels agonizingly slow when approaching the lock becomes incredibly fast when the muddy wall of the lock is flying past several inches away and the closed gates at the far end seem to be rushing up like a freight train. And if Ganymede is slow to gather forward way with her 8-hp outboard engine, she’s even more reluctant to take it off again: her ten tons have a lot of momentum for the little engine to deal with in reverse. Add to this the turbulence encountered if water’s already pouring into the chamber or there’s an adjacent dam sucking water over the spillway, or if the wind is helpfully blowing from astern, and an entrance can get squirrely really fast.

We were grateful that there were no other boats sharing the chambers with us as we locked up the first four or five locks; there was the entire length of the chamber to slow down in before we had to snag the lines that hung down from the edge. The children, who unlike us had managed to get used to locks, didn’t bother to leave their games down below to come out and see as we went up each one. It was not long before the locks began to go down again rather than up, meaning that Ganymede was over the hump—she had floated to a higher elevation than ever before, over a hundred feet above sea level, and was on her way back down.

There was a huge dredging project underway in the canal system, with dozens of barges and tugs moving around, and scores more anchored off the channel or even halfway in it, in the skinny bits. Some of the buoys had been removed and it wasn’t always obvious where deep enough water would be. Often we would pass just two feet away from an anchored barge to avoid shallow water beyond it. That was all very well when everything was plain to see, but on the second morning of the transit a fog rolled thickly in to spice things up, and we found ourselves playing chicken with several smallish tugs and barges in the gloom. I almost laughed when after a close encounter with a barge-mounted crane that was coming up the wrong side of the fairway the driver stuck her head out the window to ask how much foggier it was ahead. Here again a radar would have only been a tease, since the maze of anchored barges to be woven amongst would have painted a target clear athwart the channel in some places, making a passage through look impossible. It was another thing we did not get used to, though it had happened often in days before and was destined to again, this groping about in gray dampness straining our eyes for buoys and landmarks and other ships.

Still, in spite of the drawbacks and difficulties, it was a splendid canal, bordered almost it’s whole length by trees in full autumn splendor, with always something interesting to look at—when it was clear. We emerged from the canal on a Saturday afternoon, tied up to a bulkhead in Troy to rest and celebrate (Jamaican food was about all we could find, but it does very nicely), and continued down the Hudson River on Monday.

The Hudson River! What a gloriously historic waterway, winding among high forested hills full of legends, tales and the folklore of early America. As Ganymede passed by the Catskill mountains, the girls imagined they could hear Rip Van Winkle’s Dutchmen bowling among them; the guns of Fort Ticonderoga could well have blown us out of the water had we been an enemy ship of yesteryear

Finding a marina that was still open we tied up to re-step the mast and (oh glory!) go to the first real grocery store since Quebec City. We were now back in tidal waters, so our daily runs were regulated by them, and twice we found ourselves battling terrible chop and even four-foot square waves as the tide and the prevailing southerly winds conspired to mischief. There was rarely a morning without rain or thick fog, but on the whole we made very good time down the river, and got to see a great deal of lovely scenery.

Our last stop in the river was at Nyack, NY, where we anchored to get some Chinese food and wait for a fair tide. You can get all the way to New York City and through the East River with one tide if you leave Nyack just at slack water. Of course slack water happened at that most sleepy hour of three AM, but that meant there would be less traffic to battle as we shiveringly pulled on all our layers and got going under a canopy of bright stars.

There is no way to get lost between the Tappan Zee and George Washington bridges, even in the dark, so I sent Danielle below to get more sleep while I hunched, shivering, over the tiller. We arrived at New York Harbor just when all the ferries were beginning to run, and for a couple of hours endured a purgatory of wakes and close encounters with vessels of all sizes—but mostly big—before we turned the corner into the East River where the ferries were more occasional than perpetual. We had caught the tide just right, and whooshed through Hell Gate into Long Island Sound with plenty of daylight. Although it was early still, the rising wind made us grateful enough to anchor in the lee of City Island and have a run ashore, congratulating ourselves on a very successful week. All locks, canals and narrow waterways had been got past, New York Harbor was left astern, and now only 120 miles of Long Island Sound separated us and a winter home in Newport. 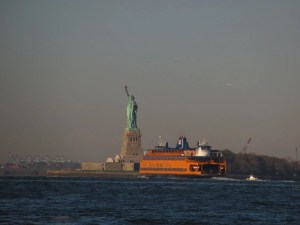